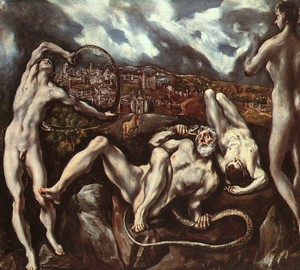 In 1506, a remarkable sculpture of an unknown sculptor from Rhodes Island was unexpectedly found in Rome, depicting the death of the priest Laocoon and his sons. The work inspired many creative contemporaries to read the famous mythological plot. El Greco did not stand aside, moreover, it can be assumed that the sculpture found had an indelible impression on the painter, because the picture he later wrote became EDINCULT from all the creative heritage devoted to Greek mythology.

Recall the plot. Laocoon tried to warn the Trojans: reproaching them for excessive credulity, he called for to abandon the gift of the Danians and not to roll the giant horse into the halls of the city. For this, the Gods punished the cautious Laocoon – the snakes strangled both the priest and his innocent sons.

El Greco rethought the plot somewhat. In particular, instead of the mythological Troy, Toledo appears on the canvas, the city in which El Greco spent almost his whole life. The heroes cast by snakes are maximally brought to the fore. One of the sons is already dead, the strong old man Laocoon is fighting to no avail, and his second son is still standing. However, his fate is a foregone conclusion – the snake ruthlessly has already drunk on its side. In despair, the young man pulls his hands to heaven, but the Gods (and they are on the right side of the composition) look at everything that happens impartially. Art critics still argue who the artist, Artemis and Poseidon or Paris and Elena, portrayed from the Greek pantheon. Even the assumption was made that it was Adam and Eve.

In the picture you can notice a vivid style line of the late period of El Greco’s work – excessive elongation of figures and brokenness, unnaturalness of human postures. It is believed that this work was not completed by the painter – death prevented the completion of the painting by El Greco.