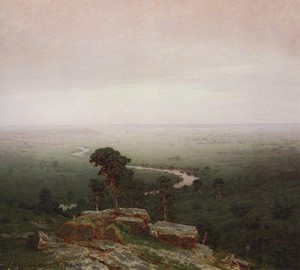 The painting “North” is included in two trilogies at once. One of them is the exposition, which Quinji introduced in 1879, before finally disappearing from the secular life of society. Along with the presented work, “Brach Grove” and “After Thunderstorm” were exhibited. The second trilogy is already plot – the idea of the canvas came to the painter back in 1872, when he conceived a cycle dedicated to the north. At first there was the work “Ladoga Lake”, then “On the island of Valaame”, and the final accent point was “North” with a strict pine in the foreground and a vast horizon on the distant.

The majestic northern panoramic landscape includes few elements, but how much space is in the picture! The artist opposed the near and distant plans, taking advantage of the favorite reception of many Russian landscape painters – the viewer seems to be standing on a bare rock himself, admiring the opening view, where a flat green steppe cuts the winding tape of a narrow, but full-water and cold northern river.

Most of the canvas is given to the sky, which is covered by the steppe to the horizon, providing the opportunity for it to only slightly appear through a thick darkness. In the image of the sky, the influence of impressionists is felt – this special nature of the transmission of the air-to-air environment cannot be confused with anything. The technique of Archip Quinja here is dynamic and intermittent with the finest combination of pale pink, blue and white colors, merging into spectacular mother-of-pearl overflows.

Nothing prevents us from looking at the distance, and pine trees on the rocks only emphasize the “naked” landscape of the harsh northern edge.

It would seem that there is no thick greenery, bright sun, glare from sunlight – just a rather mean landscape, but how poetic and inspired it is. Quinji not only was able to visorably notice this discreet beauty, but also reliably convey it, as well as inhale some unknown mood into the landscape that attracts the viewer to the canvas.