The painting “Souvorov’s Crossing through the Alps”, Surikov 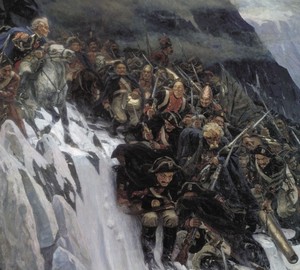 The picture presents to the viewer one of the most amazing cases of Russian military history. An example of that inexplicable, unsolved and terrifying enemy was the removal of Russian soldiers. The author managed to convey the atmosphere of the event, successfully select images for work, convey the movement itself, emotions.

The accuracy of the details, the scrupulously prescribed faces of the soldiers, the compositional originality of the work cannot but affect.

Russian soldiers flying into the abyss, encouraged by their commander. The figure of a brilliant commander does not immediately catch the eye. She is indicated by the views of two soldiers who respond with a smile to Suvorov’s joke.

The clouds located at a distance of the outstretched hand from people indicate the height at which the action of the picture unfolds. White, blind alpine snow and ice, bluish rocks obscure the sky.

The readiness of the soldiers to follow where the commander ordered is striking. Behind this is complete trust and confidence in the undeniable military talent of Suvorov. The commander himself is depicted as a miniature, gray-haired, but fearless. His calm delights even more if you compare him with the panic in which the horse of a commander abides, frightened by the abyss. The artist concentrated the light on the figure of the commander. His head seems to be surrounded by radiance.

The soldier system is gradually collapsing. If the camping system is still guessing in the upper part of the picture, then in the lower part there is almost free sliding down.

It is known that the author for a long time failed to convey this sense of movement. The biggest difficulties were with the figure of a soldier at the very bottom of the work. He did not “want” to slip.

The longer you look into the details of the picture, the brighter you feel the greatness and severity of the transition: with guns, in complete ammunition, without any equipment.

The author does not hide the severity of the military operation. The viewer is attracted by the image of a soldier who dives himself with a sign of the cross, a very emotionally “painted” soldier is only beginning to slip along the ice slope (exploited from horror eyes – the main detail), the fervent face of the artilleryman, etc. d. It seems that the very next second the whole soldier string will rush into the abyss.

Only at first glance you might think that the descent turns the soldier’s system into chaos. When carefully examined, you can notice several details refuting the first impression: the regiments are carefully calmed down, reliably protected by the strong hands of the standard bearers. An interesting figure of a drummer who recently set the pace of the army’s movement. He is just as solemn now. Despite everything, his drum is in excellent condition, and in his hand he squeezes the sticks. After a second, he will have a difficult descent, but now he is holding a drum tightly, ready at any time to fulfill his duty.

Highlighted in the army of Cossacks. Their behavior differs from the actions of soldiers in the regular system. Armed with peaks, they evaluate new, unusual conditions for themselves from the point of view of not a warrior, but a scout who has fallen into difficult conditions. One of them is closely following those who begin to slide down the slope in order to choose the best way to lower at the last moment.

Work can be considered endlessly. Each time discovering something new, special, previously unnoticed.