The painting “The Defense of Sevastopol”, Alexander Deineka – overview and analysis 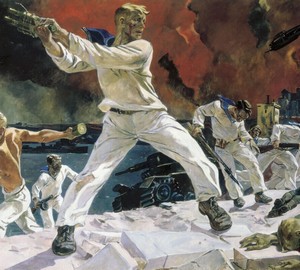 According to the works of the artist Alexander Alexandrovich Deineka, you can trace the entire path of the country of the Soviet period, starting from the revolution of 1917 and ending with the middle of the 20th century – the heyday of the USSR.

His painting “The Defense of Sevastopol”, written in 1942, is called an artistic masterpiece in its design and execution.

As a person who loved his homeland with all his heart, he could not help but respond with his work to a military event – the Great Patriotic War. He works in the information “TASS Windows”, draws political posters, brings a lot of sketches and sketches from trips to the front page.

But, according to Alexander Alexandrovich himself, the decisive impetus for writing the picture was the photograph of Sevastopol destroyed by the Nazis. He was amazed – is this his favorite, cheerful, bright, sunny city by the sea? And Deinek is so passionate about writing a picture that after six months, in the fall of 1942, she was presented at an exhibition in Moscow.

The author set out to not reproduce a specific event, but to symbolically show the battle between two irreconcilable forces: on the one hand, uncontrollable power, rage, fearlessness of the defenders of the city, and on the other – black invaders.

The battle goes on the embankment of the city, the whole sky is covered with smoke from a blazing fire, away the ruins of houses.

Sailors running from the bottom up to help the rest immediately enter the battle, blocking the path to the seashore.

In the foreground are paintings by a warrior throwing grenades. He is wounded, but in his entire position there is a determination to destroy the hated enemy crawling into his native land.

Deineka deliberately uses such a move as a disproportionate image of figures – a sailor in white looks larger and more impressive compared to a flimsy fascist buried in the ground. By this he says that no matter how the battle ends, in front of the army defending its homeland, the enemy will always be shallow and weak.

The canvas “The Defense of Sevastopol” is perhaps the strongest work in Deineka’s work. Created in a difficult war year, it gave a confident message that such heroes would never be broken and victory would certainly be.