The painting “The Feast of Kings”, Filonov Pavel – overview 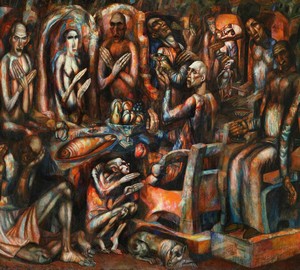 The feast of kings is Pavel Nikolaevich Filonov. Oil on canvas. 175 x 215 cm
The painting “The King’s Feast” by Filonov is part of the cycle “Introduction to the World Color.”. The work was created in 1912, on the eve of the First World War. The monumental canvas reflects the severity of the life of that time.

The picture depicts eleven figures sitting at a table. The choice of dishes is not accidental and modest enough: fruits and fish, perhaps this is a ritual meal of dark forces. The glasses are filled with wine or sacrificial blood. The faces of the characters are unpleasant, repulsive, with animal grinders and empty cold eyes.

The artist accurately emphasizes how much power distorts the souls of people. The author introduces disharmony into the silhouettes of people, as if specially portraying their bodies in the wrong proportions, creating angular terrible images. The poet Velimir Khlebnikov suggested that these people are “dead men” and the feast is “a feast of corpses”.

Some “kingles” crossed their arms over their chest as before reading the prayer. The artist’s contemporaries believed that the picture could be considered an antithesis of the Last Supper.

At the bottom of the composition, under the table, the author places a slave and a jester in reptiles. The faithful dog of darkness lies at the feet of its master. Some characters are depicted without clothes, probably so Filonov emphasizes the depravity of power.

Blood red tones, gloomy light of the moon immerse the viewer in an atmosphere of terrifying mystery and impending tragic events.

The “Pir of Kings” clearly demonstrates the principles of “analytical art”, according to which the picture should reflect invisible phenomena. A true master intuitively feels the atmosphere of mood in society, and the most daring one – transfers it to a canvas.