The painting “The First Symphony of Shostakovich”, Pavel Filonov 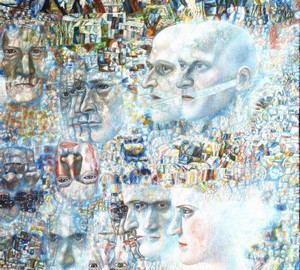 The first symphony of Shostakovich is Pavel Nikolaevich Filonov. Oil on canvas. 99.8 x 68 cm
Symphony number one D. D. Shostakovich became a thesis of an outstanding graduate of the Leningrad Conservatory. The work was first performed by the Leningrad Philharmonic Orchestra in 1926.

P. N. Filonov painted the painting “The First Symphony of Shostakovich” in 1935. When the work arrived at the meeting of the Tretyakov Gallery, experts at the beginning could not determine its name. Only after removing the frame did the author’s inscription appear.

It still remains a mystery why Filonov expressed his admiration for brilliant music only ten years after the premiere. He was probably completely passionate about his work. Or maybe at a more mature age, the Symphony heard on the radio responded in a special way in the heart of the artist.

The picture consists of many elements, among which are the faces of people. The images are placed on the canvas like elements of a musical camp: some are separate, some are collected in pairs, in triples as chords. Some heads are upside down.

The creative ways of the famous artist and brilliant composer have some similarities. Dmitry Dmitrievich was reverent about his works, considering each sound very important. With an amazing rumor, he could determine that “the second violinist on the third remote of the first violins” played one wrong note. So P. N. Filonov worked hard on every atom of his work.

Both Filonov and Shostakovich worked in the energy stream of inspiration almost without stopping. Modernists recall that the composer did not need a piano to write music, melodies sounded in his soul. Maybe. the artist felt this, filling the picture with a transparent blue and cosmic glow.

The picture became a symbol of innovative art of the first half of the twentieth century.