The Pitti Palace – Florence. All architects in Palazzo Pitti 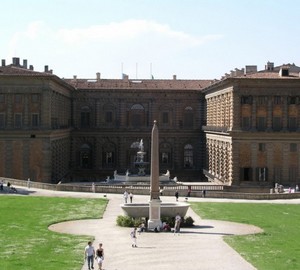 One of the most significant Florentine works of art of the Renaissance is the Pitti Palace (Palazzo Pitti). A gigantic Palace with a long façade is 205 m and a height of 38 meters and is located on Piazza Pitti on the left Bank of the river Arno, near the Ponte Vecchiu.

A succession of architects worked on the Pitti Palace

The construction of Pitti Palace was completed only in the eighteenth century, although started in 1448. Cosimo the Elder commissioned from Brunelleschi’s construction of the via Larga of Palazzo Medici, but the project seemed too pretentious and the order was given to another architect Michelozzo di Bartolommeo.

The Florentine Luca Pitti, a rich man, eager to outdo in the luxury of the Medici family, decided to build a Palazzo, hiring the Filippo Brunelleschi is the most famous architect, the author of such works as the Dome of the Cathedral Santa Maria del Fiore, the Pazzi Chapel, the Oratory of the Church of Santa Maria degli Angeli. There is a perception that the architecture of the Palace is not engaged in Brunelleschi himself, and his pupil Luca Fancelli.

Luca Pitti wanted the courtyard was able to accommodate the Palazzo Medici, and the size of the Windows would match the size of the doors. It is believed that the exorbitant spending on construction was the main reason for the bankruptcy of Luke. 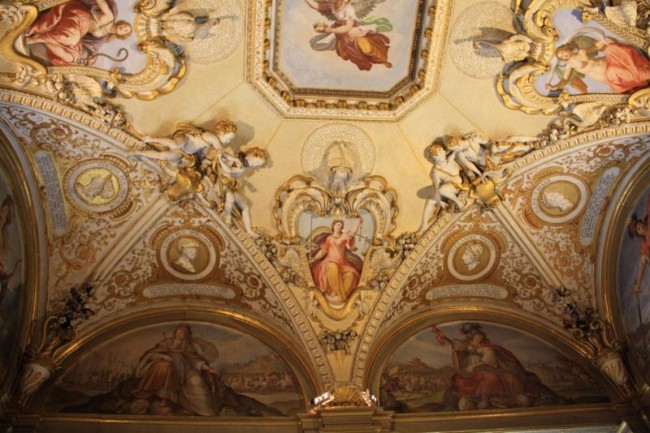 Pitti Palace – the ceiling
A century later, the Medicis bought the Palazzo in honor of the marriage of the Duke Cosimo I de ‘ Medici to Eleonora of Toledo. To complete the project were hired Bartolomeo Ammannati, author of the famous courtyard.

During the domination of the Dukes of Lorenski was made of the extension of Rondo of Bacchus and Rondo four-wheel – left and right wing.

The famous Boboli Gardens, located behind the Palazzo, is the true standard of landscape art. In the performance of the Gardens involved the style of mannerism – the unification of nature and art: trees harmoniously with fountains and statues, alleys smoothly into the caves. 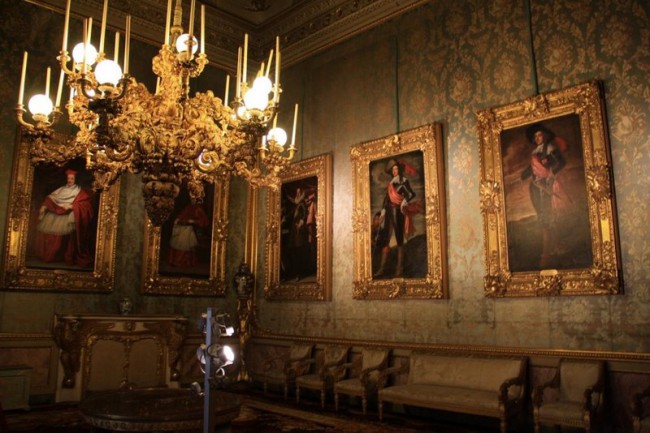 One of the halls of Palazzo Pitti
Exploring the museums of Italy, you should know that modern Pitti Palace is the home of a number of museums: the Palatine art gallery, gallery of Modern Art, Museum of silver, costume and carriage Museum, which present the exhibition of works by artists of Italy XIX-XX centuries, crystal, jewelry and Chinese porcelain, the largest exhibition of Italian fashion history and crews.

The first hall is the hall of the Palazzo Castagnolito start the inspection. Further, the passage leads to the rooms of the fine arts, Aurora, Hercules, psyche, of Berenice, halls of Music, the Prometheus, Odyssey, Mars, Saturn, Jupiter, Venus and Apollo.