The porcelain Museum in Munich, Germany 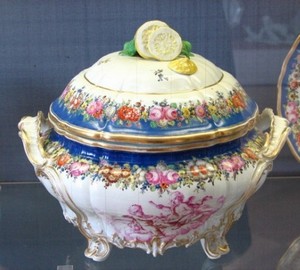 Until the 18th century in Europe did not know how to produce porcelain, and all products imported from China. But with time the Europeans mastered the art of porcelain production, appreciating the beauty and elegance of this material.

One of the first factories that produce porcelain ware, opened in Bavaria, about 1747. There was a shop that was painting porcelain and pottery shop.

Initially, a porcelain manufactory was sponsored by Max Joseph III. But since the first 2 years of the wizard could not create a quality product, he just lost to this business interest, and livelihood of the factory, is simply not enough. But she was not given to close Siegmund von Haimhausen, who was the Director of mining, and one of the significant figures in Munich. He donated his own funds in order to continue the life of the factory, and it gave results. In 1754, the manufactory produced their best porcelain.

All products are made manually, and the composition from which to make products in operation remains secret. Of course, this is reflected in the price, but 7качестве products too.

The porcelain Museum in Munich is the Nymphenburg castle in its left part. Visitors learn about the history of China, the first master, make this product. One of the most famous artists on porcelain is Francesco Antonio Bustelli, who first created more than 100 products, and he is the author of figures of the Italian commanders, who, by the way, is still made according to his technology.

During the reign of Ludwig I, workers have mastered the painting farforu. They started to make different dishes, but it was not intended for food, and were made for the image on her rulers and other VIPs.

Over time Nymphenburg manufactory passed into the possession of the brothers Bouml. They gathered about 30 thousand forms, which still produces porcelain ware.

During the Second World war, the factory was seriously damaged, but after some time it was restored, all the same brothers Bouml. The porcelain Museum is one of the oldest museums in Germany.