The position in the coffin is Michelangelo Buonarroti 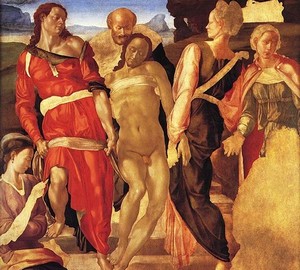 “The situation in the coffin” is an early unfinished painting by Michelangelo Buonarroti, which shows how the body of Christ, removed from the cross, is transferred to the grave.

Researchers note in this work some contradictions with the traditional iconography of this plot, which make it difficult to uniquely identify the characters. St. John the Evangelist is usually depicted in red robes and with long hair. So, here he is to his left of Christ and participates in the transfer of His body, although, as a rule, he does not do this, but stands next to the Virgin Mary, supporting and comforting her. Other characters are probably Nicodemus (who brought myrrh and aloe to embalm the body) and Joseph Arimafein (a wealthy member of the Sanhedrin and a secret disciple of Christ, who received permission from Pilate to remove the body from the cross). The knee-deep figure on the left is apparently Maria Magdalina. The image of Madonna is only outlined in general terms in the lower right corner, it is always at the right hand of Christ.