The procession in the Kursk province, Repin 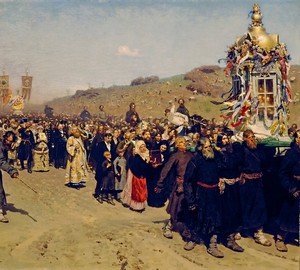 An outstanding portrait painter, master of historical and domestic genres, I. E. Repin presented the large-scale canvas “The Crossroads in the Kursk Province” – a work far beyond the scope of the domestic genre – at the Eleventh Travel Exhibition.

From the depths, a heterogeneous human stream moves directly onto the viewer and as if breaking into real space. Ahead of the procession is singing and carrying a huge canopy decorated with colored ribbons from an icon with a gilded dome in which the flame of candles flickers. Behind them is a crowd of churchmen and philistines, led by two women bowed over an empty kiot from under a miraculous icon with humble reverence. Then a red-headed priest with a censer is visible, and at some distance the local rich lady with the expression of arrogance on her face carries the most miraculous icon. Nearby comes the rest of the city nobility: a military man in a uniform, a merchant with a golden chain on his stomach and a high clergy.

And on both sides, this noble audience is cordoned off by horse policemen and hundreds of whores on their chest. They guard the procession from a simple people, that hungry and impoverished crowd, which with sincere faith awaits mercy and a miracle from the “applicable icon.”. Ahead of all broke through a young wretched hunchback on a crutch, with an expression of spiritual detachment, he is directed forward, but he is blocked by a stick.

The picture made an unprecedented impression on contemporaries. Conservative sections of society immediately raised an aggressive debate around her. In the reactionary press, work was scolded for unfair conviction and poisonous sarcasm. But all the friends of the artist, advanced youth, students, intelligentsia and educated dredgers accepted her with enthusiasm.