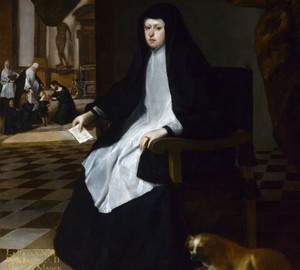 This picture is made in a dark, gloomy gamut that fully meets its content. The Dowager Queen is dressed in monastic robe, in which the white element contrasts sharply with the heavy, black fabric of the upper part. It covered as if pushing with its weight on fragile female shoulders, forcing the queen to lean on the handle of the chair.

The widow sits in a massive wooden chair with a rather high straight back. A dog, a loyal friend, protecting his mistress, rose at her feet. The dog looks alerted towards the viewer, thereby creating the effect of presence. The woman has some kind of document in her hands. Its color emphasizes the wax hue of the queen’s hands. Her face does not reflect suffering, but endless sadness and longing, her eyes are full of tears, but her lips are tight – she is a queen and will not sob in public, even if she wants to howl with grief.

The foreground is skillfully highlighted with a massive velvet curtain or drapery saturated chocolate color, which visually frames the image of the queen. As was often used in Spanish painting of that time, especially at Velazquez, space is not limited to the plane of the rear wall. It continues, opening the views of the audience a spacious hall with a high ceiling, large columns and statues. The glare of light plays the shahmatoma plate cell on the floor. On it, nuns and dwarfs play with the child, while the queen relentlessly experiences her grief. She remained a widow at age 31, buried to death her husband, King Philip IV, three of her five children.

Despite the restrained and dark colors, the picture does not produce a painful impression. Saturated colors highlight light spots – the typically “Habsburg” young face of Marianne and the bright glare on the clothes of nuns with a child. This emphasizes that life goes on.