“The Resurrection of the daughter of Jairus,” Ilya Efimovich Repin – overview of the painting 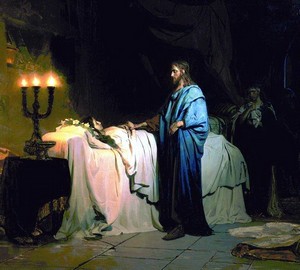 This dramatic complex canvas was the first big work, and with a plot to it, the painter chose the famous biblical story. Jairus, who was the head of the synagogue, came to Jesus and fell at his feet – his only daughter, dying twelve years old. The request for help is interrupted by the terrible news – “… your daughter died, do not bother Teacher.”. But Jesus goes to the house of Jairus to reveal the miracle of the Lord and resurrect the girl mourned by his parents. Repin chose the moment when Christ comes to the bed of the already dead daughter of Jairus.

Looking at this work, despite the drama of the plot, you do not tire of reassuring yourself: the name “Resurrection of the daughter …” gives confidence that the final of this scene will end in a miracle and the girl will wake up, because as Jesus said: “she is not dead, but sleeping.”. Therefore, you allow yourself to carefully look at the picture, noting the logic of constructing the composition, the accuracy of human characteristics, the color palette and the integrity of the presented plot.

The left side of the picture is illuminated by a candlestick – the light grasps out the gloomy atmosphere of the room, the Savior, the bed and the pale white face of the departed. Such a meaningful interpretation of the light, distinguished by semantic expressiveness, makes Repin related to Rembrandt (this was his favorite technique).

The right side is darkened, and from this half-dead are the faces of mourning parents. These heroes were written by Repin, based on a memory of personal tragedy. In the same way, his parents mourned the little daughter, the sister of the painter, when she suddenly died, filling her heart with emptiness, and the house with sorrow.

The picture is characterized by academic rigor, the nobility of color interactions, and the restraint of gestures. Everything in it breathes the high and demonstration of the greatest power of the human spirit. Jesus holds the deceased by the hand, his face calmly – he is ready to reveal the miracle of resurrection.

Many sources claim (according to the testimony of the cousin of the painter) that Repin created the picture presented to the music of L. Beethoven, namely, under the divine-noble and scanty sounds of the “Lunar Sonata”.

The picture “Resurrection of the daughter of Jairus” is considered the “official” beginning of Repin’s creative career, which will be very bright, rich and fundamental for all Russian art.