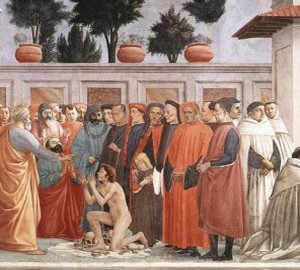 The Resurrection of Theophilus’s son is Mazaccio and Filippino Lippi. 1426-1502

Mazaccio in the mid-1420s. a series of frescoes for the Brancacci chapel was ordered in the church of Santa Maria del Carmine in Florence, describing the life of St. Petra. St. Peter twice appears in the scene, which depicts two episodes of the missionary journey of this apostle to Antioch at the same time: the return to them of the son of the skeptical ruler of the city of Theophilus (shown by the city dwelling in the niche in the left part of the composition) and the subsequent intronization of Peter by the townspeople as their bishop. On the fresco of Mazaccio, as witnesses of this miracle, members of the Brancacci family were probably depicted. However, this fresco was rewritten by Lippi in the 1480s., and many of the original figures were replaced by portraits of contemporaries of Lippi himself. The bones under the feet of a kneeling boy (one of the characters written by Lippi) indicate that he was long dead when Peter resurrected him.

SV. PETER. Peter, the “Prince of Apostles”, occupies a special position among the disciples of Christ, and in iconography he always stands in an honorable place, on his right hand from Christ. Its significance is emphasized in the Gospels very often – for example, when Jesus agrees to allow him to walk with him on the water. After the Resurrection, Christ is Peter and commands him: “Save My sheep.”. Peter began to preach among the Jews, while St. Paul was among the Gentiles; it is believed that Peter was the first bishop of Rome.

It is customary to portray Peter as a cheerful elder with curly gray hair and a beard; often on it is a yellow cloak over green or blue clothes. Its usual attribute is two keys.