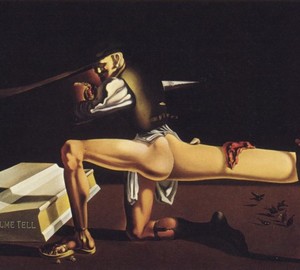 In 1933, Dali painted a picture that caused his breakup with surrealists – “The Riddle of William Tell” (Museum of Contemporary Art, Stockholm). Tell in the artistic world of Dali symbolizes his father, who deprived his son of an inheritance.

However, the canvas clearly shows that Lenin is holding the child in his hands! The artist had previously written by Vladimir Ilyich, but here his appearance seems completely incomprehensible. In fact, everything is simple. Surrealists were supporters of communist ideas and Vladimir Ilyich, respectively, were very respected. Dali just wanted to cause their rage. But crutches, propping up the very ambiguous buttock of the leader of the world proletariat and the visor of his cap, are a much more complex symbol. Usually it means death and ascension.

The “Milhelm Tell Riddle,” as expected, infuriated surrealists. This was the last straw in the patience: Dali already annoyed them with his passion for Hitler (in fairness, for the sake of noticing that the artist never supported the ideas of fascism, Hitler himself simply attracted him). They tried to break the picture exhibited in the Salon of Independent in 1934, but they were not able to carry out their plan only because the canvas hung too high.

Then a friendly trial was appointed over Dali, following which the masters were expelled from the group. However, he was not too upset. A genius who did not suffer from excessive shyness proclaimed: “Surrealism is me! And I really think so, for I am the only one who is able to develop it further. ”. By that time, he had already lost his destiny – to save art.