The Rijksmuseum in Amsterdam 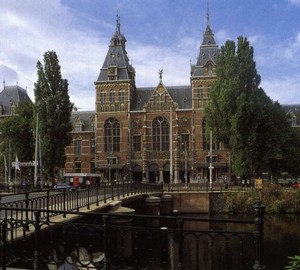 On the waterfront of one of Amsterdam’s canals on a quarter stretches a huge building. Traditional Dutch gabled roofs, red brick walls have in common it with the surrounding buildings. The building has no distinctive architectural merit, but of course included in the total appearance of the city. It’s the Rijksmuseum, one of the largest art museums in the world.

In the middle of the last century, fifty years after the creation of the Museum, it was clear that the lovely old Trippenhuis, in which he was, could not accommodate the rapidly growing collections. In 1876 and 1885 the architect Kuipers built a giant brick building. Repeatedly renovated and redesigned inside, it continues to serve today. 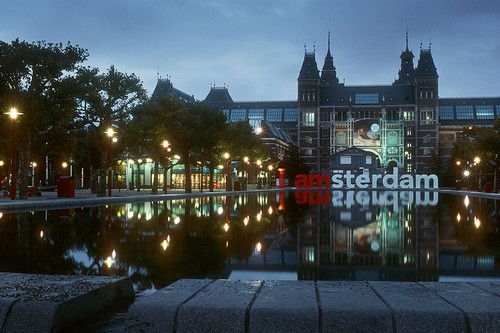 Amsterdam Rijksmuseum (gall. The Rijksmuseum) is a Museum of the history of art of the Northern Netherlands. In its halls you can get to be extremely wide view of the artistic development of the country. As already mentioned, from the middle ages there are few that survived. Only since the XV century our information about the artistic development of these lands be more or less detailed and complete. The Museum shows samples of wooden and stone sculptures that adorned the altars of churches, the works of jewellers and gold-embroidered vestments of the clergy.

However, the greatest interest is undoubtedly the painting. Already in the XV century easel painting were in the Northern Netherlands the leading area of art, and easel works, as you know, is much better suited to the Museum than wall painting or a monumental sculpture, created for the decoration of a specific building. Last lose part of artistic expression when they are transferred to the Museum straight from the original architectural environment. Due to the predominance of easel painting Dutch art can be shown in the Museum better than the art of many other countries. 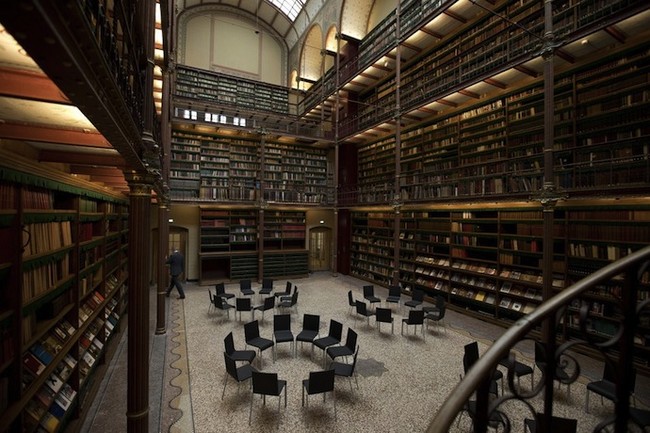 In XV—XVI centuries the culture and art of the Northern and Southern Netherlands (i.e. modern Holland and Belgium) is more or less coherent whole, and local schools in the North have a powerful influence major art centres thriving in the South. Just as we call the Netherlands North Holland, the Southern Netherlands generally spread the name of the most significant, best of them were included in the regions — Flanders. Already at this early epoch of Dutch painters differ from their Flemish colleagues are more intimate, domestic simplicity and directness of his works.

In the North the first major artist whose work we are familiar, was Garden the Sint Jan (that is, “little Gerrit from the monastery of St. John”). Gerken worked in the 80-ies of the XV century in Harlem; there still remained a small, darkened monastery Church, in which he was a novice.

Among the first paintings purchased in 1808 by order of Louis-Napoleon, was a curious thing, included in the inventory of the Museum under the following title: “Jan van Eyck. A Gothic Church with figures“. Jan van Eyck, the great founder of the Dutch school of painting, the author of the the Ghent altarpiece, was at that time almost the only Dutch artist of the XV century, whose name was widely known to collectors; he attributed everything that seemed old enough. This time he was considered the author of “SV. collection” works of Gardena.

Written on a small wooden Board, a piece of Gardena does not reproduce the canonical text of the gospel, and the apocryphal legend. According to this legend, St. Anne, mother of Mary, had two daughters whose children later became apostles — disciples of Christ. 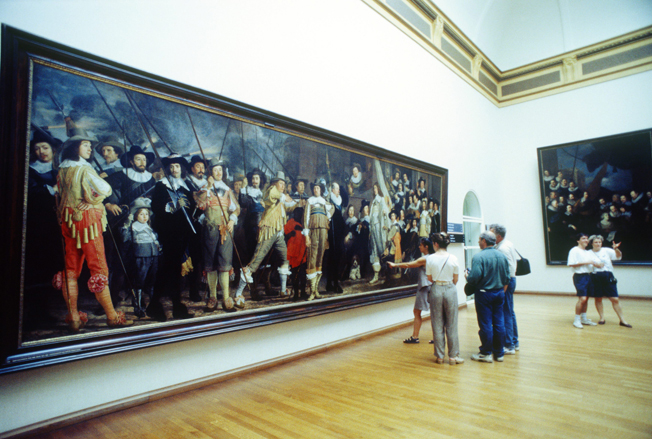 In the interior of a Gothic Church (the Church is the “house of God”), the artist places the elderly Anna, her three daughters, their husbands and children. Not only children, but adults are distinguished by a clear serenity and naivety. Women nurse babies, old Anna takes a break from reading, setting the open book on his glasses. Slim on the stone floor of the temple, in the middle of the picture, was occupied by three little boys in a long, warm shirt and woollen stockings with red patches on their heels; but the future apostles Paul, James, and John play their attributes — sword, bochechki and bowl. They have the charm and fun of living children. With a delightful ingenuous spontaneity of Garden brings together into one reality and imagination, everyday objects and the majestic architecture of the temple. For him interesting and attractive all — great and small. Next hang two of Gardena: “the Root of Jesse” and “the adoration of the Magi” with its wonderful landscape background.

Different character is the work of a major Dutch artist who worked in the last quarter of the XV century and known as the master of the Virgo inter Virgines. Conditional “name” of anonymous comes from a painting, in 1801, located in the National gallery of art and arrived from there to the Rijksmuseum. It’s “Mary with child and saints virgins,” or in Latin “Virgo inter Virgines” (“virgin among virgins”). 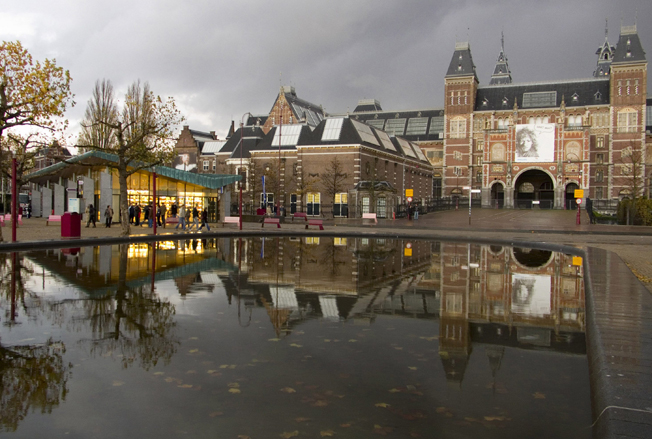 Like the retinue of court ladies, the virgin is surrounded by luxuriously dressed saints Catherine, Cecilia, Barbara and Ursula. Their attributes (wheel, which killed St. Catherine; the arrow is a symbol of the martyrdom of St. Ursula) transformed into delicate gold jewelry. A slender delicate woman stood in reverie, from which they cannot withdraw even a game with a tiny baby. The artist repeats his favourite, a very unusual type of a female face with very high prominent forehead, thin eyebrows and half-closed, slightly swollen eyelids. Pale face, pale, often grayish colors, among which red loses its resonance — all this causes the viewer with a strange feeling a bit sad, a bit cold detachment from all earthly things. In its inner structure painting confronts the works of Gardena hanging in the same room.

In the works of both masters important role to play in fantasy. The Master Virgo inter Virgines she is exquisite and conditional, as Madrigal court poet of the time, Gardena — soaked real experiences and close to lively and various science fiction folk tales. In the writings of many fellow Gardena scenes of Christian legends look as if they had occurred in the environment surrounding the artist and good friend. Especially consistently stick to the author of a series of paintings depicting “the Seven works of mercy”.

The series was executed in 1504 for the Church of St. Lawrence in Alkmaar, so its author is conventionally called the Master of Alkmaar. Seven paintings make up the frieze. Each pious burghers, fulfilling the Covenant of Christ, which give clothing the poor, feeding the hungry, burying the dead, etc. All this is happening on a clean, paved streets of the Dutch city. Each of the “works of mercy” due to its household of specificity is reminiscent of a genre scene. In the crowd of ugly, poor, blind and crippled, there is one person who does not participate in action, which you do not notice the rest. This Is The Christ. In the opinion of the artist and his customers, he is invisibly present here, Recalling the religious meaning. Dry the work of the Master of Alkmaar introduces us to the world of everyday prose and a stern moral duty, vaguely anticipating some features of the Dutch art of the XVII century. 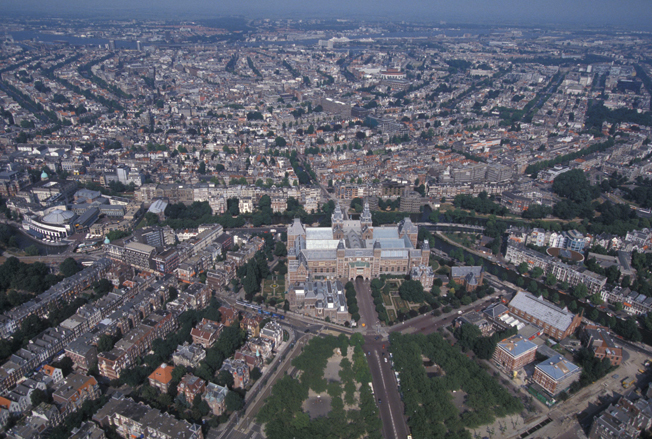 The Rijksmuseum possesses several works of the greatest Dutch artist of the XVI century — Luke of Leiden (perhaps 1489-1533). Among them, particularly interesting is the “Sermon in the Church.” Renaissance Church building fills only two-thirds of the background; right away visible to the street, where richly dressed gentleman giving alms to the poor. In the foreground is the same gentleman with the intelligent, subtle face is depicted standing at the right edge of the picture; taking off his hat he’s listening to a Church sermon. It is possible that the artist worked on the order of that person, and a group of people around him consists of portraits of his family and friends. From them are markedly different audience, sitting in a semicircle before the pulpit: there are strange freaks and lively child; a beautiful young woman smiling, looking at the viewer, oblivious to the words of the preacher; finally, one woman sleeps, and on her head sits a little owl – a symbol of trickery and stupidity in Netherlandish folklore. This strange genre scene, full of obscure allusions, written translucent brushstrokes light fluid, uncertain colors; and smear and color convey unsettling mood, characteristic of the painting of Luke at Leiden.

Major landscape painter of the first half of the XVII century were Jan van Goyen (1596-1656). In 1641 he wrote his “distant view with two oaks”. It is unremarkable terrain with sand dunes, typical for the Dutch coast. On top of the dunes, at the foot of a gnarled old oak trees, they stopped to rest two Wanderers; the receding figure of the third passerby takes our eyes into the distance, to the flat coast where the horizon, to the left, you can see the glistening strip of water. The clouds delay the vastness of the sky through a ray of sunlight breaks through the dune and powerful half-withered trunks. The artist studies them at close range, tracing the irregularities of the bark, almost humanly expressive, tense-bending boughs. At the same time, a wide scope was given is perceived as their natural environment and this relationship with the infinite space helps us feel the Majesty and power of giant trees. 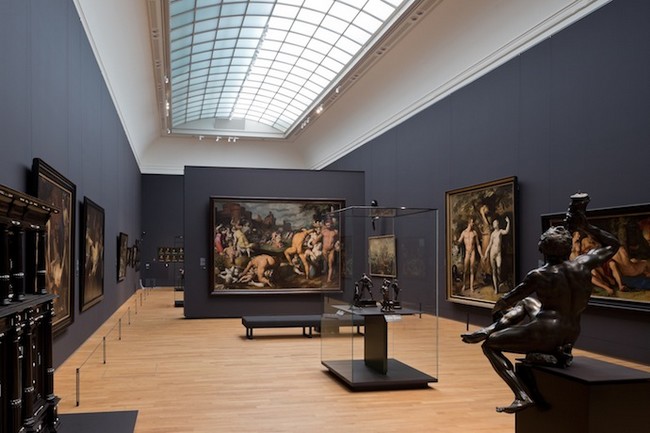 Along with its main sections — the old Dutch art and Dutch painting of the XVII century — the Rijksmuseum possesses a significant collection of Dutch paintings of the XVIII, XIX and XX centuries. Among the works of the XVIII century the interest of the rope-hauled light Cornelis (1697-1750), author of portraits and genre scenes, often reproducing scenes from theatrical productions. Following the tradition of the previous century, Trost writes a huge group portrait of the Trustees of the orphanage in Amsterdam (1729). However, much more interesting and attractive small sketch of one of the Trustees — Ian Leveltake hanging in the same room. It is written with ease. It is more than a great portrait, it is noticeable the impact of the national painting tradition.

There is the Rijksmuseum and works by foreign masters — the Italians, Spaniards, Flemings. They are few, but some of them can’t go unnoticed: a pair of portraits of the Florentine architect Giuliano da Sangallo and his father Francesco Giamberti, the work of Piero di Heimo (1462— 1521), the “Crucifixion” by El Greco (1541-1614), a series of portraits by van Dyck (1599-1641), “Portrait of don Ramon Satue” (1823), Goya (1746-1828), etc. However, no matter how they were interesting, they are only minor, lateral branch in the collection of the Rijksmuseum.