The ruins in Chuguchak, Vereshchagin – overview of the painting 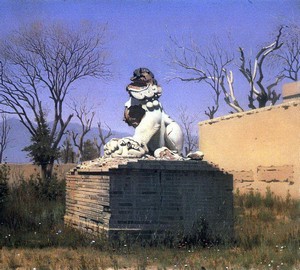 Outwardly, the peaceful and calm, even peaceful image of the ruins in the city of Chuguchak, which now belongs to China, has a terrible background. At the time of creating the picture in this area, a fire of uprisings of local peoples has raged for many years – Uyghurs and Dungan. The rebels were suppressed with unprecedented cruelty, the cities were devastated to the last resident, so that from them there were only dead ruins with streets full of bones of the dead and ashes of burnt buildings. Surviving cats and dogs did not even roam the ruins, the destruction of life was so complete.

It was this terrifying state of the absolute absence of a living creature that the great artist reflected in his series of paintings about Chuguchak. The canvas depicts the ruins of a city with a large statue of a Chinese lion in the center. The statue is partially destroyed, as is part of the structure on the right and the walls in the depths of the picture. However, there is no feeling that this happened naturally, in ancient times. And this is due to the fact that although around it is full of high grass, it is clear that the mighty old trees against the background of a pure blue sky and distant blue mountains are dead. They burned down, and those on the right, behind the large ruins, suffered the most. It becomes clear that the city was burned and looted, and its population was very badly damaged.

But even in such a sad picture there was a place for the manifestation of hope. It is expressed in the revival of nature. On yesterday’s streets and squares of the abandoned city, grass began to grow, shrubs break through and wild plants bloom. Trees with burnt crowns are partially restored, and those that died irrevocably are covered with curly greenery, which will soon hide their painful wounds. Civilization will be reborn and the city will come to life again, but whether people have the mind and goodwill not to return everything to its sad source?