“The ship among the stormy sea”, Aivazovsky – overview of the painting 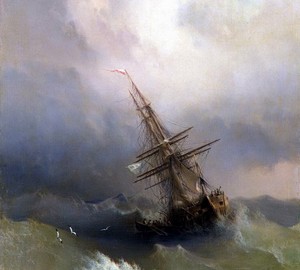 The ship among the stormy sea is Ivan Konstantinovich Aivazovsky. 1887. Oil on canvas. 97×62.5

The illustrious artist-marinist and batalist Ivan Konstantinovich Aivazovsky (1817-1900), an Armenian by origin (Ayvazyan), worked in Russia for most of his life. His creative heritage is enormous, and the popularity of works is only growing. In its sea landscapes, the painter managed to recreate the majestic pictures of the struggle of ships with elements, formidable battles, the charm of calm and poetic night sea views.

In the picture “The ship among the stormy sea”, the romantic nature of the work is clearly read. The past storm caused irreparable damage to the ship, its ropes mixed up and involuntarily hung among the masts. The ship creaks and groans, still keeps afloat, but cruel waves will gradually break the resistance and drag it to the bottom. The orphaned ship in a hurry leaves people sitting in a boat, desperately rowing to the shore. The thunderstorm sky is not fully realized, the rays of the sun glimpse a little, illuminating the cold and foaming surface of the sea surface. The viewer sees through the vast expanses of the blue waves of the wreckage of dead ships. With each master’s smear, the canvas becomes more and more dramatic.

Aivazovsky is a true artist, in love with nature and endless sea.