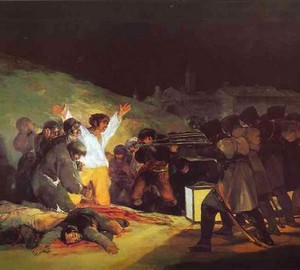 The artist’s works on the 1808 uprising in Madrid, which he had to survive, are very different from the historical paintings of romantics. They characterize a patriot painter calling for struggle as a humanist condemning the war.

At night, in the light of a lantern near a hill on the outskirts of the city, soldiers shoot rebels. The faces of the soldiers are not visible, the compositional center of the work is a condemned young peasant in a white shirt, spread his arms wide. The behavior of all actors was surprisingly truthfully conveyed: some with a call will smash the executioners in their eyes, others dutifully bowed their heads, others covered their faces with their hands. Polotno permeated with the passion of personal experience, the dark landscape enhances the feeling of imminent tragedy. The artist not only captured a terrible historical event, but also showed the morality and heroism of the Spanish people.