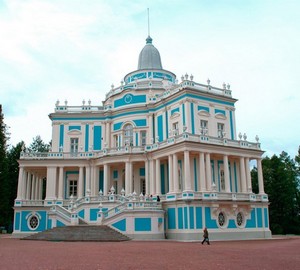 In 1959 he completed the basic restoration of the sliding hill pavilion in Oranienbaum. The pavilion is the only extant part of a huge entertainment facilities — tobogganing, built by A. Rinaldi in 1762 — 1774 years.

Roller coasters occupied a peculiar place in the Russian garden and Park architecture of the XVIII century. Their creation is associated with the names of the major architects of that time — V. Rastrelli, A. Rinaldi, the famous architect Vasily Neyelov and the outstanding mechanician and inventor of A. K. Nartov.

Skiing from the mountains, one of the favorite folk entertainment, was widely spread in Russia. Ice mountain in the eighteenth century were to be found almost everywhere. Decorated trees and lanterns, these mountains were a beautiful sight. Skating became popular in the court life, especially in the 1740 — 1760-ies. So, in 1735 in St. Petersburg under the tsarist Palace to the first floor was attached to a wooden ramp covered in ice and sledding. Later, mountains began to formalize as a separate Park facilities, high-rise part of which was built in the form of pavilions. By nature they belonged to the “fun” type buildings and was a kind of complement to the front of the palaces, making them and the surrounding Park unified ensemble.

Roller coasters belong to the original Russian buildings of XVIII century. According to contemporaries, they brought foreigners in amazement. In Western European countries similar structures in this period is not found. Model Gore has repeatedly sent abroad, and later it also began to create similar structures. “Russian mountains”, for example, are the Paris “Luna Park”. The name itself shows that the idea of building dates back to the Russian mountains roller coaster.

Oranienbaumskaya sliding hill was one of the largest architectural ensembles of the XVIII century. It covers an area of 22,000 sq meters and had a length of 532 meters. With the height of the third floor of a massive pavilion was coming down a long mountain, consisting of three straight and wavy rays, following each other on one line. The sides of the slopes were obramlenii colonnade, forming a gallery, covered flat roof. Decorated with balustrades, sculptures and vases, they were a pleasure grounds, from which a scenic view of the Park and the mountain. The gallery consisted of more than seven hundred columns and more than a hundred pylons. In the middle of the colonnades stood the two towers, which enhanced the entrance to the ceiling of the galleries. The mountain riding in wheelchairs, is provided with twelve metal wheels moving on tracks embedded. Back wheelchair back using the hoist with a rope.

The sliding hill was built in Oranienbaum in the years when in Russian architecture, a period of changing architectural styles, and in it, as in other works by A. Rinaldi, reflected a new artistic quest. When creating the ensemble, the architect relied on the traditions of Russian national architecture, engineering and construction experience of their predecessors.