“The Temptation of St. Anthony,” Matthias Grunewald, “overview of the painting 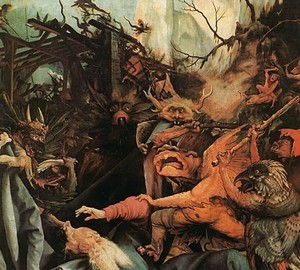 St. Anthony is a figure in the Christian religion, knowing. This is the first reliably known person in the history of monasticism, which also became synonymous with the struggle against temptation, with carnal desires, “personal” and suggestible demons tormenting flesh and spirit. It is not surprising that such a character was often depicted in religious canvases, included in altars. The Eisenheim Altar brush of the wonderful German Renaissance painter, Matthias Grunewald, was no exception.

Today, very few works of Grunewald (no more than a dozen) have been preserved, but from those works that have reached the modern viewer, the most iconic is undoubtedly the Eisenheim Altar, which includes the picture “The Temptations of St. Anthony” (left side).

St. Anthony is depicted quite in the spirit of that time – an defeated, but not broken, elder with a long beard, but the demon-tumbers were significantly different from generally recognized interpretations (it is enough to compare the picture with the work of Bosch to the same plot). The demons here are cruel and ruthless. Grunewald presents them in the form of ferocious powerful monsters.

An attentive viewer will notice that there are seven demons in the picture. This is the direct personification of the seven deadly sins: the orange hippo with wings is gluttony; the ugly lizard that clung to the Holy in the hand is greed; the horned monster that pulls Anthony by the hair is a prototype of envy.

Immediately note the variety of colors that Grunewald uses. The picture literally pestles from saturated colors: red, yellow, gray. The compositional and coloristic center can be called the robe of St. Anthony, decided in an interesting saturated color sea wave.

You can also notice interesting opposition. The foreground is literally “throw” with uncleanness, the appearance of which scares and repels, and in the background is snow-white chalky rocks in the frame of a blue serene sky.

A large yellow spot in the sky, as a symbol of light, heat, something higher is also no coincidence here. Researchers believe that this is a hint of the presence of God the father, who came to the aid of the righteous, who went to fight his temptations in the Egyptian desert. This leads the viewer to the idea of a successful outcome of bacchanalia.