The Uffizi gallery in Florence. Address and description of the Museum 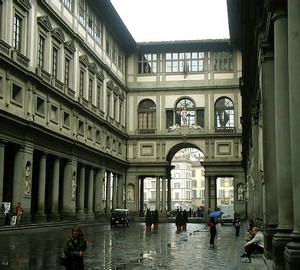 The Uffizi is one of the few museums in the world, which has gathered together in one place so rich an impressive collection which gives the possibility to organize various thematic and historical routes, alternative is essentially the usual way of organizing a visit to the galleries. Routes through which, for example, the famous works of art can be traced to major historical events.

The gallery, which is now considered an essential part of development of art of the Western world, appeared in one of the most significant moments in history – in the era of the highest dawn of the Florentine Renaissance at the behest of Grand Duke Cosimo I de ‘ Medici.

The building of Uffizi was intended to house state institutions and had become the new and modern administrative center symbolizing Ducal authority. In this context, the building was planned to be located next to Palazzo Vecchio, which meanwhile, of the municipal building turned into luxury ERTS-Ducal Palace.

“I have never had to work on the construction of the building, whose construction was so difficult and dangerous, as it laid on the shore of the river, and almost in the air,” proudly wrote the architect Giorgio Vasari, which Cosimo I entrusted the construction.

The time of the start of work on the Grand building of the Uffizi, 1560. The architectural ensemble, designed in the shape of a horseshoe, and consists of two parallel buildings connected Selianski balcony with scenic views of the Arno. The light-flooded Piazza della Signoria, and brownish-Golden rusticated blocks of the Palazzo Vecchio, passes this characterized by simplicity and elegance of the closed complex, an architectural solution of which Vasari has developed turning to the ideas of his favorite Michelangelo.

The new multifunctional centre of the Grand Duchy of Tuscan occupied three floors. On the last floor in the West corridor, Cosimo I wished to place many Florentine craft workshops industrial art Studio. On the lower floors, was located 13 Florentine agencies, the doors of which faced the square, as evidenced by today’s lettering and symbols, the taming of the longitudinal beams.

To the West wing of the complex adjoined the old mint where they minted gold and silver florins, which at the time was used in Europe, the largest demand due to their stable weight and cost. In the niches of the pilasters of the portico was supposed to host various sculptures according to a popular Florence the tradition has already been reflected in the vicinity of the Church of Orsanmichele. The statue was supposed to represent the famous people to revive the memory of the greatness of the ancient forum of Augustus. But only in the mid-19th century in the empty niches Vasari was placed 28 statues, from Giotto to Galileo and Machiavelli to Michelangelo, were called over the centuries to praise the Tuscan genius. 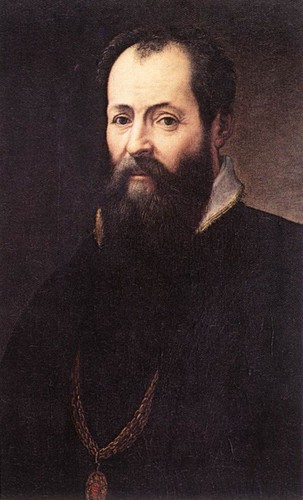 For the decoration of the monumental portals and fins the entire complex was chosen, alternating with a white plaster Florentine gray stone, brought from quarries in the valley of Mentholy, valuable to the extent that it was possible to obtain a special license of the Governor.

The Uffizi became one of the few buildings, for cladding the external walls of which have been used this kind of stone, which were usually intended for decorating interiors and courtyards.

In 1565, on the occasion of the wedding of his son Francesco John Avstriyskoy, Cosimo I charges Vasari to build a secret passage to the Prince could get out of the Royal Palace and walk through the city without an escort of military convoy. Pass a length of almost 1 km was laid within a few months. This amazing Vasari corridor runs along the building of the Uffizi, then workshops over the Ponte Vecchio across the Arno, and disappeared among the houses and palaces. Exit the corridor, was in one of the grottos of the Boboli gardens behind the gates of the city. 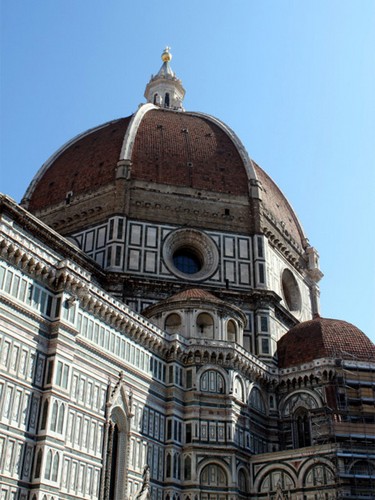 When in 1581 Francesco I established the first part of the gallery, moving into the most valuable objects of the family collection of works of art of the room on the top floor was converted into exhibition halls, which could come only through private entrances of the Palazzo Vecchio.

The noble staircase by Vasari, consisting of 126 steps of grey stone, was only on the second floor of the complex and ended in the lobby of the court theatre Medici. From the old court theatre built by Bernardo Buontalenti in 1585, the landing has original marble portal at the entrance to the present Cabinet of drawings and prints, and three doors leading to the vault opposite the stairs.

Over the Central door stands the bust of Frances I, representing the coat of arms of the Medici family, Florentine Lily, the emblem of the Prince, Laurel and zodiac sign of Aries. On this floor is the Cabinet of drawings and prints Dating back to the 17th century at the initiative of cardinal Leopold de Medici. In these premises is one of the most important collections of works of graphic art. 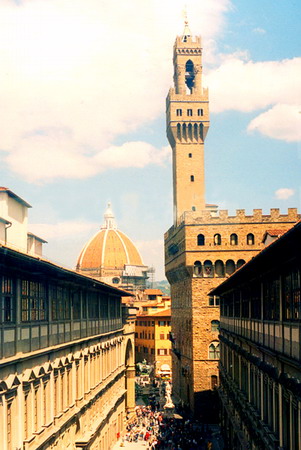 When, in the 18th century, came to power lotharingie Peter Leopold decided to create a new entrance to the gallery, which, in accordance with the new educational ideas, was finally opened to the city, so it was decided to continue the Vasari staircase that visitors could pass to the Museum.

Above the entrance door to the gallery is the bust of Peter Leopold, the enlightened Prince, with an inscription dedicated to the founder of one of the first modern sense of museums of Western history. In the corridors of the gallery contains many Roman statues, which became the subject of enthusiastic study of restoration already in the Renaissance. Gradually expanding collection of 15th-century Antiques, precious stones, medals, coins, valuable vases from various sources between the 16th and the 17th century added unusual collection of ancient statues owned by the Medici family. 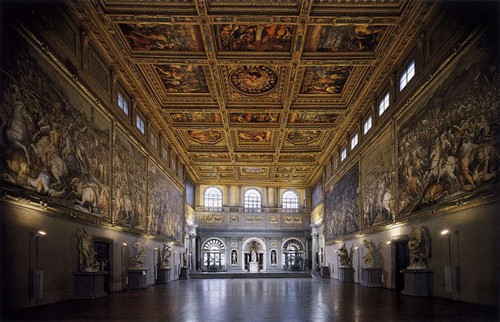 Today, the exhibits are arranged on the principle of the original device proposed ERTS-Duke Francesco I. In the beginning of the first corridor is one of the great masterpieces of ancient art represented in the Museum, Hercules and the centaur, a precious copy of the Roman time, of the original bronze work of the ancient Greek sculptor Lysippus.

The three arches of the corridors are painted with fresco with an intricate ornament, the so-called grotesques, depicting allegorical, mythological and fantastic scenes. The cycle originates from the most skilled and notable for its decorative elegance grotesques, written by Alessandro, and As his assistants in 1581. Completing the route collection of portraits.