The Virgin Oak, Brullov – overview of the painting 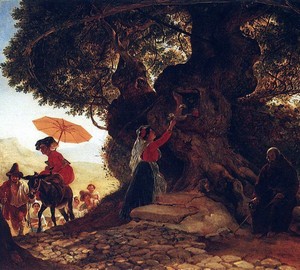 In the painting of Brullov “At the Bogorodetsky Oak” it is customary to look for the features of the work of another artist – Mikhail Ivanovich Lebedev. The representative of the academic school, Lebedev, managed to introduce dynamism and movement into his work, subject to all traditional canons. Favorite plot of the painter were mighty oaks, vyaz, forest paths. With the work of a young landscape painter, as well as with himself, Brullov met thanks to his younger brother.

The painting is written in watercolors. The central place in the work is occupied by the majestic oak, which is the sacred place where wanderers make their pilgrimage. And now a diverse audience has gathered around the immense trunk – a decrepit elder, a woman, a girl with an umbrella who came on a donkey.

Masterfully, the artist transmits a play of light that tries to break through the thick crown of trees.

By the way, the society for encouraging artists did not approve of the fascination of the main painter of the empire with watercolors – this saw a gap with academicism. Meanwhile, bright fresh watercolors, such as “At the Bogorodetsky Oak” – an integral part of the work of the great Brullov.