“The Witch Worship,” Sandro Botticelli – overview of the painting 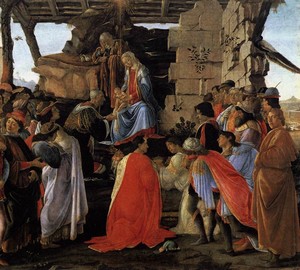 Witch worship – Sandro Botticelli. Wood, tempera. 111 x 134 cm
In this multi-figure composition, the master of quatrocento Sandro Botticelli presented in the form of the Magi worshiping the Infant Christ, members of the Medici family, bankers and merchants, rulers of Florence, and close to them, among whom he himself was.

Among the ruins of ancient Rome, symbolizing the end of the old world and the beginning of the new, Christian, Madonna sits. She holds the Baby on her lap, stands behind, leaning on her hand, Joseph and looks at the newborn with intent. Before Christ, Cosimo the Elder Medici knelt down.

Closer to the front of the picture are the sons of Cosimo, Piero and Giovanni. By the time the work was written, they and their father had already died, but Botticelli included them in the family circle as inextricably linked. In black with red robes, there is, thinking, Juliano, the son of Pierrot, behind him with a beard and in a hat – the philosopher Giovanni Argiropulo, in front of him in blue – the customer of work, Dzanobi del Lama. On the left in a proud pose is Brother Giuliano, Lorenzo the Magnificent, next to him is the poet Angelo Politiano, something is told by the humanist and philosopher Pico della Mirandola. Finally, in the lower right corner, Botticelli himself is looking at the viewer wrapped in a red cloak. The tradition of portraying oneself among the participants in the scripture scene was widespread in the Renaissance.

The Medici established the so-called Brotherhood of the Magi in Florence, where they themselves and their associates entered. The fraternity arranged costume processions: its members, dressed as wolves, walked and rode horses on the streets of the city. Probably, these mysteries also found their echo in Botticelli’s painting.