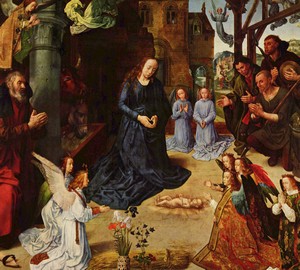 The worship of the shepherds (Altar Portinari) – Hugo van der Gus. Around 1476-1478. Wood, butter. 253×588
The master of the Northern Renaissance Hugo van der Gus (between 1435 and 1440-1482) knew how to reflect in his works the surrounding world with all its details and at the same time look at the depicted from the height that was inherent in the Renaissance. The artist had a genuine interest in the inner world of the people whom he painted, and the described quality was inherently Renaissance. All this was especially fully manifested in the presented triptych.

The altar is dedicated to the worship of shepherds of the Baby Christ, on the side sash are donators – Tommaso Portinari, his wife Maria Baroncelli, their children and saints, and the Annunciation is presented on the back of the sash. The Italian Tommaso Portinari, who headed the representative office of the Medici Bank in the Belgian city of Bruges, ordered this altar for the Sant Egidio Church in Florence.

The main part of the altar represents the vast space in the center of which lies the Baby Christ, who looks especially small compared to the figures of Our Lady, Joseph and the shepherds. In this case, the Italian master would draw a chubby and large child, to emphasize its unusual origin, but the Dutch artist is true to the realities of life, therefore, in the altar image of Van der Gus, the newborn baby is small, he has a foggy look of a person who barely appeared in the world and weak movements of pens and legs. Having portrayed God who came into the world in the form of a tiny, touching child, the artist set a special mood for the work – tenderness.

His feeling is subtle, since no one here is openly hushed up: Our Lady is immersed in the contemplation of the Son, the angels thoroughly proceed to prayer, on the faces of other characters – deep thoughtfulness and seriousness. But by the way Joseph’s hair is scattered, who did not have time to invite them from excitement, by his hands diligently folded in prayer, by the impulse in which the shepherds bow to the Baby, a joyful shock is felt, replaced by rastroganism in the souls of all these people. And only one of the shepherds with a rude, common-people face, who did not have time to kneel down and fold his hands prayerfully, looks at what is happening, literally opening his mouth with amazement. The artist is attentive to all these details, since they create the mood of the picture, as well as the flowers in the vase in the foreground, partially showered, and the expanded robes of the angels on the right, and a beautiful, light-stricken landscape in the background.

When the altar was brought to Florence in 1483 across the sea, he hit those who saw him and had a great influence on Italian painting.