“Theft of Christ,” Matthias Grunewald, – overview of the painting 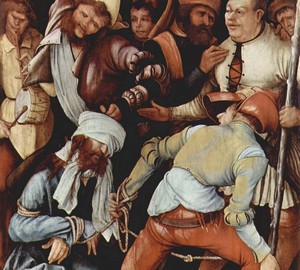 This picture is written as an epitaph for Apolonia von Kronberg. She was the sister of the knight Johann von Kronberg, who managed the residence of Archbishop Mainz in the city of Aschaffenburg.

As a topic for his work, the master used an unusual plot that is not often found in traditional church painting – the reproach of Christ. This is a Bible episode that colorfully describes the moment following the betrayal of Judah. Guardians sent by the Sanhedrin arrest Jesus Christ in the Garden of Gethsemane as a dangerous rebel who incites rebellion against the then-owned Rome of Palestine.

The peace preacher was beaten and humiliated, compared with criminals and thieves, insulted, despite the fact that he did not show resistance and humbly took blows. This further annoyed and angered the stupid and cruel people.

It was this moment that the German master chose for his canvas. His work reflected the best trends in Renaissance art. He used complex compositions and chose extraordinary themes for paintings, giving the canvases of dynamism and effect to the accurate and verified use of active colors.

A complex topic required the same unusual composition. The artist chose a circular type, placing many figures in action on the space of the picture. As a result, the canvas really seems mobile, because each figure interacts with other characters.

The bright figure of Jesus Christ, sitting with his hands tied and blindfolded, is surrounded by real monsters. These evil creatures with distorted ugly faces beat a defenseless person and literally revel in their cruelty.

Joseph of Arimathea, who played a significant role in the history of Christ, who subsequently gave his tomb to the murdered godfather, humiliates the smug, wrinkled guard chief to spare a peaceful and non-resisting person, but they do not even pay attention to him.

The active action on the canvas is emphasized by the skillful selection of colors. All figures, except Christ, are made in a warm reddish-chry gamma with yellowish accents and a predominance of dark tones. But the figure of Jesus is clothed in a chiton of cool blue hue. This underlines his detachment from earthly life and future resurrection and ascension.

This picture is a symbol of human inertness and antimony, a kind of last tribute to the artist Christ. It is not surprising that he chose this particular topic for the picture, which was intended for the role of epitaph.