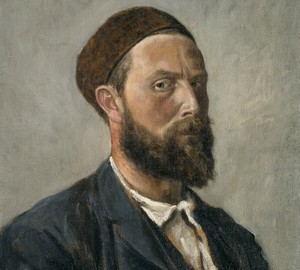 Theodor Severin Kittelsen – artist, Illustrator of books and graph is a native of Norway. Special glory he brought drawings depicting traditional Norse mythology trolls, as well as landscapes and works based on other myths.

The artist comes from a large merchant family from a small town Kragerø. He was born in 1857. With him the parents had eight children, and master was the second. Since his father died at a young age, older children had to help his mother to feed the younger and of themselves, therefore, Theodore had to start early working career. He was an assistant to the painter in Christiania (Oslo), which launched his love for painting and art.

While working as a watchmaker’s apprentice Theodore was fortunate to meet with the patron Dereham Olomu, who noticed the undeniable talent and decided to pay for training young men in the school of arts. Two years later the young man went to study in Germany, but after only 3 years the patron due to financial difficulties, ceased to pay for the training.

Theodore had to go home and go to serve in the army. He was able to go to Paris, the Mecca of artists of the time, to get to Munich. But the paintings could not feed him without bringing a high and stable income.

In 1883, together with two artists from Germany, he received the order to execute the illustrations for Norwegian fairy tales in three volumes.

Four years later, the artist permanently returned home. The lighthouse Keeper job in Lofoten made him closer to nature and gave it time to work. Over the years he has created three books, with text and illustrations were of his authorship. They gave him recognition and love of admirers of his work.

In 1889 Kittelsen married, and his life gained new colors. A few years later he created the book that made him famous. It was called “Black death”, was dedicated to the events of the middle ages, when Europe was raging plague almost turned Norway into the wilderness.

The beginning of the XX century was marked by significant technological and industrial changes. In 1907, the master visited the new buildings of the famous energy company “Norsk Hydro”, and then wrote a series of paintings “Tales of fall”. It is dedicated to large-scale construction and poetiziruet technical progress and achievements of humanity.

In the same year the wizard was awarded the highest award – the order of St. Olav. 1911 was marked by the artist for the creation of autobiography. He died in 1914.

The creative style of the Norwegian artist’s unique and recognizable. His work is still popular and often used as various illustrations. Illustrate the local fairy tales and legends drew attention to the Norwegian folklore and popularized it around the world. They look extremely modern, as if came out from under the brush or the pen, the artist of our generation. Obviously, this is due to the persistence of the master in our ever changing world.