They fall by surprise, Vasily Vasilievich Vereshchagin – overview of the painting 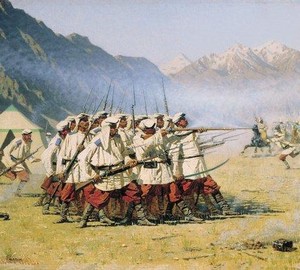 This picture is included in the series “Varvary” and refers to the “Turkestan” period of the artist’s work. It is written, so to speak, “in hot pursuit.”. The artist personally survived the sudden attack of the enemy and was literally close to death.

The picture depicts the raid of an enemy cavalry on the location of Russian troops. According to enemy orders, their banners and weapons, as well as the “colonial” summer uniform of Russian soldiers, it is clear that the matter is happening somewhere in Central Asia, but a specific place is not indicated. The canvas reflects any of the many battles in which Russian soldiers died.

The composition of the picture is panoramic and covers a large area. To the left of the viewer are light tents of the Russian military camp, a wave of formidable, heavily armed local horsemen rolls on the left. By the horror in which the soldiers flee from them towards the tents, it becomes clear that the attack was sudden, no one was waiting for it.

Although the artist was accused of disrespect for Russian soldiers because he portrayed some of them in a panic flight from the enemy, it seems that they did not understand the main idea of the picture. And it consists in the fact that the Russians exclusively courageously defended themselves and their colleagues, in fact being already doomed to death. This is evidenced by a close-knit group of soldiers who closely closed their ranks and bristled with rifles with benches. The fact that these are not lonely heroes is also indicated by the background of the canvas. It shows that several more soldiers are fleeing to the armed group to help from the tents – they do not run away, saving their lives, but join those who will defend themselves to the last. It is clear that they will not be able to confront the enemy and perish, but they did not run, did not flinch, but rendered the greatest possible rebuff to the enemy.

The picture praises the heroism of soldiers and officers of the Russian army and emphasizes the senseless cruelty of their death.