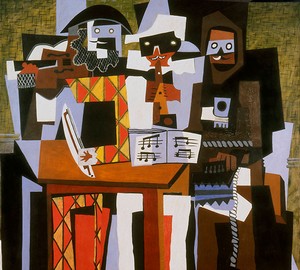 The twentieth years of the 20th century are the heyday and maximum creative activity of Picasso. A triple portrait of “musicians” is one of the most famous paintings of this period. The master was carried away by the characters of the Italian folk comedy, the famous masks “del art”.

Three images, three characters, three components of a single creative organism. Cheerful and reckless Arlekin, lyrical and thoughtful Pierrot, cunning and two-faced Monk – all three are favorite characters of the folk comedy. On stage, they are always rivals, in the picture they are friends, musicians, creating a common “melody” of work, its artistic sound.

Art historians believe that bosom friends are hiding under masks – the author himself, Guillaume Apolliner, Max Jacob. The whole trinity was at the forefront of new currents in painting and literature. All three play one tune, which is visible from the score lying in front of them.

The aesthetics of the picture is complex and ambiguous. It was difficult for the master to adhere to traditions, creating images of three, such non-traditional individuals. Therefore, the artist chooses a multi-valued technique for combining color spots, breaks the perspective, concentrates the attention of the viewer on the inner harmony of the characters, with absolute external difference.

Masks do not hide the appearance of the heroes, they symbolize their non-degree for the public, their belonging to the future rather than the present.

The main thing that unites all three figures is colors. In each of the heroes you can find colored geometric fields that echo the color fields of other characters. The author connects three dissimilar, different in views and ideas creative people into one glorious orchestra playing the music of the future.

The painting was written very quickly, in just three days, while relaxing in Fonteblo. Art critics believe that the work has become some kind of final farewell to Apolliner, who died shortly before this point. The artist immortalized the friendship of three avant-garde, two poets and one artist, united by a common search for new ways in art.