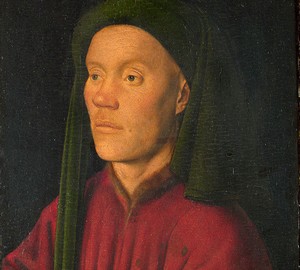 The work of Jan van Eik “Timofey”, which is also known as “Male Portrait”, is not only the earliest portrait in the author’s work, but, in principle, one of the earliest examples of a male secular portrait in medieval art.

In the picture is a man who looks very bizarre for today’s viewer. In fact, a young man (researchers give the hero about 30 years old) is dressed in the latest fashion of van Eik’s time. It has free bright red clothes, the gates of which are shaded by a thin strip of fur. On the head of a man is a sapperon, which is a hood with a long sip. This is a traditional men’s headgear in the Middle Ages.

Obviously, a man is bald – he has no hair on his head, no bristles and even eyebrows. If you look very much at the original, you can notice an unexpected detail – in a bald person without vegetation, eyelashes are present on his face. Researchers agree that they were painted much later by van Eik, in the process of restoring work.

Hands on the portrait were also added later, but either by the author himself or by one of his students. Timofey has some kind of scroll document in his hands. There are also only conjectures on this score: either these are notes and before us by a musician, or a literary work, for example, pamphlet, and maybe an important document, which means that van Eik portrayed a state husband…

The mystery of the hero is only exacerbated by his expressive eyes. This is an unfocused gaze full of piety, thoughtfulness and modesty.

At the bottom of the portrait are depicted as if carved in stone, three inscriptions – in Greek, French and Latin. The most understandable is the last. This is the year of creation and the author’s instruction. The French inscription translates as “a perfect reminder.”. And finally, the first inscription mysteriously says: “Then there was the Lord.”.

After analyzing all the available information, scientists agreed that this is a post-mortem portrait. But who exactly? The past left an answer to this riddle for itself.