To my wife, Mark Chagall 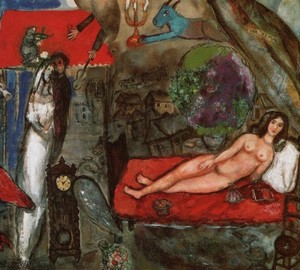 An unusual picture in the nu genre, full of symbols and signs that arise at the level of the unconscious, “My Wife” is dedicated to Belle Rosenfeld. By the time the picture was finished (1944), they had been married for almost 30 years, but Bella was still the same beloved woman, muse, manager and guardian angel of the painter.

The audience is used to seeing Chagall’s wife – usually they fly over the ground with the master himself (Walk, Birthday, etc.), but this work is solved in a completely different style. The painter decided to portray his beloved naked, while filling the canvas with his own visual quotes, albeit in an unreliable version.

Almost in the center of the picture, Chagall himself, hugging Bella the bride, and this gives a reference to the canvas “Wedding”, and there is a red angel with a violin, a frequent hero of the master’s work, and a blue goat, also recognizable. In addition, the picture is of a clear Jewish character, just look at the minor at the top of the canvas.

Some critics tend to compare this work with biblical stories related to the Garden of Eden and Adam and Eve. One way or another, one remains undeniable – the presented work is another ode of a beloved woman who, after 10 years, is destined to leave both her master and this light.