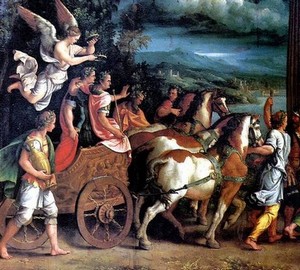 Triumph of Titus and Vespasiana – Giulio Romano. Around 1537. Wood, butter. 120×170
The painting of the painter and architect, the talented student of Raphael, one of the first representatives of the mannerism of Giulio Romano (1492 / 1499-1546) tells about the distant times of Roman history. To commemorate the victory over Judea, Emperor Vespasian and his son and heir Titus staged a magnificent triumphal procession, which became the plot of the work. On a chariot drawn by four horses, Titus and Vespasian, crowned with laurel wreaths of the winners and accompanied by the flying figure of the goddess of victory for Nicky, enter the triumphal arch specially erected for this occasion.

The composition of the picture unfolds on the principle of frieze. The impression of an endless movement is created, since neither the beginning nor the end of the solemn procession is visible. The procession disappears under the arch of the arch, the architecture of which is carefully written out by an artist, a former court architect at the court of Gonzag.