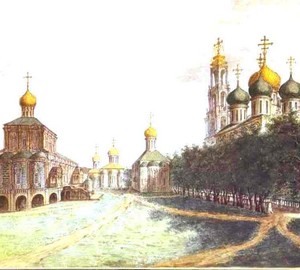 In 1800, F. I AM. Alekseev received the task from Paul I to create a number of paintings with views of Moscow. Fulfilling the order of the emperor, the artist went to Moscow with two students. Alekseev by that time was already a recognized landscape painter, master of the host (city landscape), academician of the Imperial Academy of Arts.

Alekseev stayed in Moscow for 1.5 years, creating during this time many canvases and watercolor sketches of the city and its environs. Returning to St. Petersburg, the artist was very successful with his Moscow series. Orders in copies of paintings were made even by members of the imperial family.

A large folder with watercolored etudes of Alekseev and his students was transferred after his death by the heirs to the Hermitage. Among these works was the sketch of the Trinity-Sergius Lavra. The drawing is now stored in the storerooms of the State Hermitage Museum.

Laurus has always been considered the largest stronghold of Russian Orthodoxy. This man’s monastery, founded in the XIV century in Sergius Posad, has a rich history. It stores the relics of Sergius of Radonezh and other saints. The monastery participated in the fight against the Tatar yoke, opposed the Poles during the Time of Troubles, supported Peter I during his struggle against the princess Sophia. On the territory of the monastery there is a necropolis of the Godunov family and the burial of other important figures for Russian history.

On the sketch of Alekseev, the monastery is depicted as it was at the beginning of the 19th century before the Napoleonic invasion and the great restructuring that began in the 19th century. We see a green courtyard with noisy trees under a clear blue sky. Under the holy monastery canopy, peace and silence reign. On the right side, the artist depicted the domes of the Assumption Cathedral and the elegant bell tower of the 18th century. In the distance you can see the white-stone Holy Trinity Cathedral – the oldest construction of the laurel. It was built in the 15th century. Before him, the Church of the Descent of the Holy Spirit on the Apostles is visible in the shadow of the trees, as well as the buildings of the 15th century. On the left is the Fractory Chamber and the Temple of St. Sergius. The green courtyard is crossed by multiple paths. The Trinity-Sergius laurel has always been revered by the rulers of Russia and simple pilgrims.