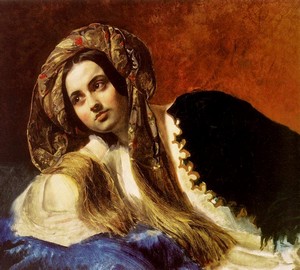 The painting “Tourchanka” was created in 1837-1839, and was inspired by a trip to the Ionian Islands, which was organized by Count Orlov-Davydov, a famous philanthropist and writer.

The program of such an artistic expedition was rich – from admiring the beauties of Greece to “conquering” all of Asia Minor, but already in Athens, Brullov fell ill and was forced to return to St. Petersburg. On the way home, the disease delayed the painter in Constantinople for three whole months, and during that time Brullov was fully able to enjoy the exotic beauty of Turkey.

Looking at the Turkish canvas, we can confidently say that the artist was able to very clearly capture the main character of this region – sensuality, nega, catchy aesthetics.

We see a young girl lying relaxed on pillows. Everything in her appearance gives out languidity, unhurriedness, and the outfit and headgear only emphasizes this non-European beauty. A bright, catchy appearance does not require muffled background tones to focus on heroin – a sharp color does not “hide” the girl, but rather emphasizes, doubles her beauty.

The canvas was not written from nature – these are the memories of Brullov, his Turkish impressions, which were so fresh and distinct that they managed to be so filigree and realistic embodied in the portrait of a Turkish girl, his “direct” beauty, symbolizing the whole region.

In the 19th century, interest in oriental culture was especially in demand and characteristic of both European and Russian artists. In many paintings of modern painters, there were outfits and interiors of oriental life.

Warm and vivid memories of the artist’s three-month stay in Constantinople, embodied in a small eastern series of paintings – “Turchanka”, “Odalisk”, “Bakhchisaray Fountain” and others.

This work of Karl Pavlovich Brullova is certainly a masterpiece of art. Although the picture was written by the author not from nature in Turkey, but after returning to St. Petersburg.

Brullova intrigued and worried the theme of a mysterious and outlandish eastern woman, so unlike the European one.

The portrait immediately attracts and attracts attention the expressive and bright face of a young Turkish woman. Lovely white and clean skin with a gentle blush, beautiful and sensual lips, elegant eyebrows with black arcs, and of course, brown with an oriental corner of the eye. The look is directed to the side, and the viewer can assume that her thoughts are pleasant and are floating somewhere far away.

Noteworthy is the outfit of a young girl. A cloak of ornamentation is thrown on the shoulder, it is made of expensive fabric and contrasts perfectly with a white dress. On dark and shiny hair – an unusual headgear – a large Turkish chalma. The chalma scale covers the chest and arms of a beauty with light waves.

The long-range juicy background and the azure of the bedspread on which the woman is lying only emphasize the brightness of the national, eastern color of the whole composition. At the same time, not hiding the dazzling, unusual beauty of a woman in the East.

In this work, Bruhllov’s talent for feeling his character with his soul, with emotions, was especially manifested. The charm, femininity, tenderness, seductivity and nega are embodied by a painter in the image of this exotic virgin.