Types of the halls of the Winter Palace. The Cabinet of Empress Alexandra Fedorovna, Eduard Gau, 1858 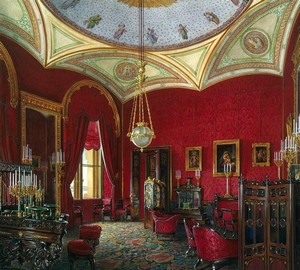 Types of the halls of the Winter Palace. The office of Empress Alexandra Fedorovna – Eduard Gau. 1858. Watercolor on paper. 27×31.6
Eduard Gau (1814-1891) is a Russian artist of the mid-19th century, a native of Revel, famous for his beautiful watercolor portraits of contemporaries of the mid-19th century. Gau’s brushes also belong to numerous watercolor images of the interiors of the Hermitage and the Winter Palace, which are of great value for the history of Russian culture. Work “Visues of the halls of the Winter Palace. The office of Empress Alexandra Fedorovna ”is striking with the ease and clarity of the transfer of all parts of the saturated interior. Photographic accuracy depicts paintings of the blue ceiling with female figures, walls covered with red silk with copies of Raphael paintings hanging on them, a intricate pattern of a colored carpet and upholstery of furniture. The Empress’s office is an example of a private residential interior of the mid-19th century that fully reflects the taste of the crowned mistress and the fashionable trends of that time. The artist’s work serves as a visual tool for decorating the space in the style of “biedermeier”.

Widely distributed in the second half of the 19th century, photography gradually supplanted such watercolors.