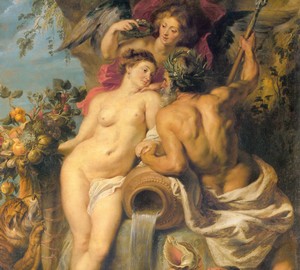 The great Flemish Rubens gave the world not only one of his magnificent creations in the Baroque style he founded under the name “Union of Earth and Water”, but also hid in his work a completely difficult, allegorical riddle …

Before us is the lush, red-haired beauty Hera, the goddess of marriage and fertility, personifying the Earth, with a cornucopia in his hand and the god of the seas Poseidon, personifying the Water. Blooming Hera, in the image of a young girl, beautiful in her nudity and not at all embarrassed, with hair curls curled in the form of a crown and pearl threads woven into them, rests on a jug pouring water.

The ancient god Poseidon, depicted by the artist as an impressive, gray-haired old man, sits on a stone in an uncomfortable position, with his right hand relying on a trident – a symbol of maritime power, left holds the young beauty by the hand and, with impatience and even some tension, waits for the goddess to answer. The bored look of a young girl eloquently speaks of her indifference to the interlocutor, here she, being the queen of the situation, makes her wait so long for her decision. According to ancient mythology, the goddess Hera and the god Poseidon did not make any alliances, although they were brother and sister, but still depicted in the picture together and under the laurel crown in the hands of the winged Nicky – the goddess of triumph and victory, under their feet, in the water, children frolic peacefully, Poseidon’s satellite blows into the sink, Triton.

On the Rubens canvas we are talking about something completely different. After all, it is certain that the young beauty Hera is the hometown of the master, Antwerp, and the mythical Poseidon, is none other than the one who ruled in all seas in the 17th century – the monarchical kingdom of Spain, ruled by the Habsburg clan. What Antwerp has been waiting for so long is access to the sea, and therefore the upcoming prosperity of the city, has happened!

It remains a mystery only to the lurking tiger in the lower left corner of the picture, in a predatory oscale looking at the horn of abundance and clinginging to it with its clawed paws, as if reminding the artist’s contemporaries about epidemics and diseases experienced by the city. But it is possible that the great Rubens left us some incomprehensible secret known to him alone.