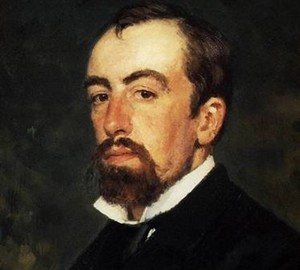 Future talented master of landscape, genre and historical painting, was born in 1844 to a large and enlightened a noble family. Basil the environment in childhood has had a great influence on him, making him susceptible to various manifestations of life and giving the opportunity to reflect their feelings on the canvas.

Amazing talent as an artist was influenced by her grandmother, who raised her children, instilling in them a love of art and the Russian nature. She encouraged the artistic abilities of grandchildren and their love for drawing. In childhood, Basil has had a huge impact North of the Olonets region with rich nature, almost untouched by human influence.

The future artist after high school he went to study physics and mathematics of St Petersburg University, but his love for painting has not forgotten. After school he studied at the Academy of fine Arts, attending a multitude of classes and classes in various disciplines in this field. Basil was diverse and richly gifted man. In addition to painting, he was fond of Opera, good sang and wrote musical creations.

For art education the master had to interrupt the course of study in the University and to graduate (with honors). In this time he has successfully exhibited and received for his outstanding work recognition and rewards in the form of gold medals. But it is not infatuated as a young person, and he successfully completed the University studies at the faculty of law.
With the help of academic scholarships, the artist went abroad, visiting countries that are now Austria, Germany, Italy. He long time lived in France, in Paris, where he created the famous painting “the Arrest of Countess d Acreman”, which earned him the title of academician.

The artist’s life was a tumultuous and very interesting. In 1874 he, along with Ilya Repin lived and worked in French Normandy, where he wrote numerous landscapes, reflecting the beauty of local nature. Two years later he returned to Russia, and when it starts the Russo-Turkish war, becoming the official artist at the rate of the future Emperor Alexander III.

The following years of the artist’s life are closely connected with teaching and working with theatrical scenery. Teaching at the famous School of painting, sculpture and architecture in Moscow is linked with the names of such future famous artists as Korovin, Levitan and many others.

The exhibition artists Wanderers in 1877 picture Polenov “Moscow courtyard” becomes a famous and very popular, and the master acquires the status of a founder of a new genre called “intimate landscape”.

Becoming a member of the Association of traveling art exhibitions, the artist enjoys landscape painting and travelled throughout the places related to ancient history and origin of Christianity. A love of nature and large open spaces makes him to buy an estate on the Oka river, which is now well known as Polenovo. There the master has arranged everything according to your taste, build a house and art workshops under the project. In his estate he has been very productive, worked on paintings, and also engaged in the education of rural children, including teaching them painting.

In subsequent years, the artist repeatedly goes abroad to obtain the necessary information and artistic material for his paintings. He spent many years on the creation of a series of paintings on gospel subjects, visited Italy and Germany.

During the First World war, his paintings have participated in charitable exhibitions to raise funds for injured and wounded from the war. After the revolution, the artist lived in his estate and continued to work on pieces of art, reflecting the beauty in them and the boundless power of Russian nature.

The master lived a long, fruitful and eventful accomplishments and creative life. He died at the age of 83 years and was buried in Polenovo, in his favorite place where he often painted from nature. After the artist left many paintings and his house, now a Museum.