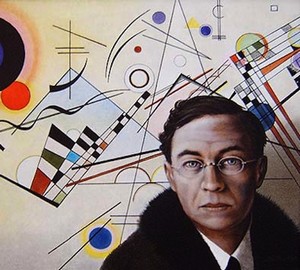 The famous Creator of the legendary “Blue rider” turned to the arts relatively late — at the age of about 30 years, that did not stop him to achieve great heights, becoming one of the founders of abstract art, the founder of numerous art associations and teacher at the High school construction and artistic design, better known as Bauhaus.

Kandinsky came from the original merchant of the Siberian kind, where intricately mingled the blood of the Tungus princes of ancient lineage, no less than the ancient princely family of Muncie and convicts, exiled to Nerchinsk for God knows what infraction.

In the childhood of the future artist and his family traveled extensively in Europe and Russia, and then settled in Odessa, which was then the third largest city in the Russian Empire. In this wonderful southern city Vasily graduated from high school and received a music and art education. Despite the undoubted talent of the boy, the parents had intended for him a career of a lawyer, which he brought to life, studying intermittently at the Moscow University.

However, real life Kandinsky as an artist begins with exhibitions of impressionistic art in Moscow in 1895, where his heart was struck by the work of Claude Monet. The following year he went to Munich, where he is immersed in the environment of expressionism, but the beginning of the First World war interrupted his development and he returned home. But with Soviet Russia it is not on the road, and Vasily in 1921, leaving their hearth and home. He went to Germany, where after some time together with his wife fled to France from the Nazis closed the Bauhaus and recognizing only our own deeply formalized and static art. In his adopted country, he acquires the citizenship of, becomes famous and lives the rest of his life.

Over the years his work Kandinsky founded the Association “Phalanx,” the school participated in the “knave of diamonds”, and then laid the New Munich art Association, and later the famous “Blue rider”.

At the beginning of his artistic career, the master worked in a realistic and partially abstract manner, experimenting with shapes and color, and wrote on the glass.

Began teaching, Kandinsky soon became a prominent theorist of abstract art and the Bauhaus. His most famous paintings is “Moscow”, “East”, “Oscillation” and “Composition”, but a lot of them and each of them has the full right to be called a real masterpiece. His paintings are extremely interesting to consider, there is a feeling that from every point of view they offer something new and unusual.

Sorry, came to power, the Nazis managed to destroy many works of Vasily Vasilievich, as well as other talented artists who are considered “degenerate art”. But the remaining paintings it is enough for us to understand what a great talent was Kandinsky. The master died in 1944 in Neuilly, a suburb of Paris.