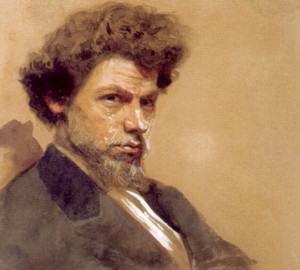 Vasily Maksimovich Maksimov – master, who has been painting all his life the Russian countryside, peasant life, their traditions and way of life. He was born in 1844 near St. Petersburg, in a family of peasants from the village Lapino.

The boy soon lost his parents and good people have defined him as an apprentice icon-painting workshop in the monastery. From 1855 to 1862 he wrote icons and studied in the Saint Petersburg monastery.

His drawing abilities and hard work led to the logical result – in 1863, at the age of just 18 years old, he enrolled in the Imperial Academy of arts a volunteer. His teachers were the famous artists of the time: academician and Professor Fedor Antonovich Bruni, a painter of historical and religious themes Petr Mikhailovich Shamshin and other masters.

In 1864 Vasily Maksimovich, like many students hold liberal and democratic views, entered into the group of commoners Peter Alexandrovich Krestonostseva, uniting different and a wide range of young people, including artists. Maksimov talented, his teachers noticed and customers.

During the period of study at the Academy from 1863 to 1866 years Maximov has written such works as “a self-Portrait and portraits of friends”, “Peasant girl,” “Heard,” “In the example of the older” and, of course, done in 1864 – “Sick child”, which was a huge success with the audience. For this work, Maximov give the 3rd degree the title of class artist and the main medal with opinion “for expressiveness and expression”.

Maksimov externally for three years, finishes Academy of arts, but refuses to participate in the senior competition. He follows the example of Ivan Kramskoy, who in 1863 with fourteen companions also refused the big gold medal and a trip abroad, protesting the academic style, contrasting it a real painting.

Maksimov explained its refusal by the fact that it is necessary first to study Russian, her village, the needs and aspirations that no one knows. Upon graduation in 1866, Maximov went to Tver province a teacher of painting in the estate of Golenishchev-Kutuzov. There comes a flowering of creativity of the artist. He dives into the world of the village and the inspiration never leaves him. In the words of the master himself, “he always came to see the village life.”

All the themes are drawn in rural life: “Motherhood,” “Old peasant”, “Girl”, “Fees for a walk” “Dream about the future,” “Poor dinner” and many others.

In November 1870 he was awarded the title of artist 1st degree. Since 1871 he participated in exhibitions of the Wanderers, and from 1874 he was an active member of this Association. Ilya Efimovich Repin enthusiastic about him as “the most enduring stone of the Foundation of peredvizhnichestva”.

His chief paintings–masterpieces were “Grandma’s tales”, “the arrival of the sorcerer at the village wedding” and “Sick man.” They haul the peasant’s share, and childhood memories, and knowledge village rituals and customs.

In 1878 he became an academician of the Academy of arts. His paintings depicting the life of the peasants delight and such a great artist as Kramskoy, who loved and was looking forward to the work of Maksimova at exhibitions.

Perhaps, the last important works of Maximov to the early 1900’s was the painting “All in the past”, written in 1889. But the fate of the artist for a long time does not spoil. With the beginning of the 20th century changed the rhythm of life of the Russian countryside and the country as a whole.
Travelling art ideas are on the decline, there are new trends in painting.

For Maksimova falls on hard times, orders almost no. Lack of money and poverty afflict him. In 1911, Vasily Maksimovich died.

It was a true fighter until the last days faithful to his chosen path in depicting the real lives of ordinary people.