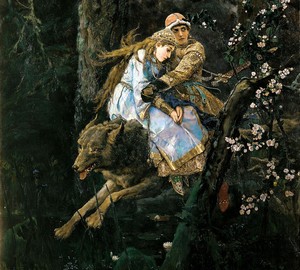 The painting by Vasnetsov “Ivan Tsarevich on Sery Volka” is undoubtedly the most fabulous work of Russian fine art. At the heart of the plot is an exciting folk tale. Tsarevich with the kidnapped Elena the Beautiful run away from the chase on the faithful Gray Wolf. The prince urgently wanders into the dense forest, confidently and firmly holds Elena. The kidnapped completely obeyed her fate. Clinging to her captor, she tries not to look around, scared by the abduction itself, the forest, the wolf.

Gray Wolf is of particular interest to the viewer. The Wolf has special eyes – human. Before us is a werewolf, or a wolfhound, as the Slavs have called him from ancient times. However, there is nothing bloodthirsty or wild in his appearance. His image is full of devotion, courage, self-sacrifice.

Gray Wolf flies quickly through the forest. If you look closely, you can see that the whole group of heroes seems to be hovering over a forest swamp surrounded by dense and sinister forests. The surrounding landscape is inhabited by marsh lilies and a blooming apple tree. Where did the apple tree come from near the forest swamp? This detail sends the viewer to the plot of the fairy tale, in which it all started with the apple tree bringing the golden apples.

The storytelling of the plot emphasizes the clothes of the main characters. The golden caftan of Tsarevich perfectly harmonizes Elena’s blue silk robe. Golden and blue in Slavic mythology were strongly associated with the mountainous world, magic, miracles. Gray Wolf is by no means gray, its wool is golden brown, as if repeating the color of the clothes of the prince to whom he serves. The whole picture is filled with some mysterious flickering, a miracle, the fairy tale itself.