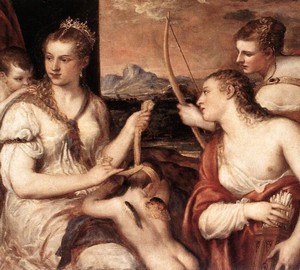 In the late period of his work, Titian (about 1488-1576) was captured by the creation of dramatic paintings on Christian subjects, but antiquity still attracted him. The artist shared the conviction of the neoplatonists that the contemplation of beauty elevates a person. That is, beauty had a religious meaning for him.

Therefore, this work, known by different names, is not only a game of artistic imagination on the topics of mythology: Venus blinds the eyes of Amur, and one of the nymphs gives him a bow so that love arrows are launched at random. Attention is attracted, first of all, by beautiful women, their faces with classic features, light golden skin, silky hair, soft gestures. Venus is full of calm dignity, the living, warming everything around the warmth is emphasized by the goddess Amur who buried in the shoulder of the goddess of love – he clung to her like a child to his mother. Beauty takes on a maternal, life-giving beginning in this picture.

It seems that the Titian canvas is breathing, and for a reason: by the time this work was created, it had come to a new picturesque manner. His canvases of that period near look like a randomly laid smears, but if the viewer takes a few steps back, he will see how images woven from color and light are literally born in his eyes.