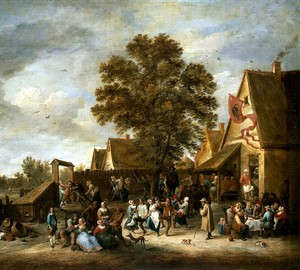 Village holiday – David Tenirs the Younger. 1646. Oil on canvas. 97.5×130
The action of the picture takes place during the holiday in honor of St. George, depicted on a red banner, anciently inserted into the upper window of the inn on the right. The date on the banner (1646) may indicate that Tenirs witnessed a particular village holiday.

According to Kling (2005), Tenirs performed this work by order of the Ghent bishop Anthony Trist. In his collection, the picture was from the beginning of 1647 to 1657 (the year of the death of the clergyman). Probably, the artist depicted on the right, in the foreground of the composition, Anthony Trist himself, who came to see the festivities. It is presented on the canvas not in the cassock, but in the long-dried clothes of the commoner, with a crumpled hat on his head and with a staff in his hands. This work, according to Klinge, was seen and appreciated by Archduke Leopold Wilhelm during a visit to the house of the Ghent bishop in November 1647.