“Vladimir and Rogneda”, Anton Pavlovich Losenko – overview of the painting 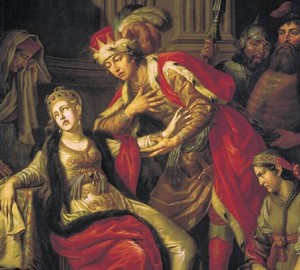 A magnificent artistic masterpiece created by A. P. Losenko! The famous historical plot is conveyed in the picture. Prince Vladimir wanted to marry Rogned, but was refused her father because of his low origin. Then Vladimir treacherously attacked Polotsk, destroying all her relatives and took the princess as his wife.

In the foreground, the brush master depicted Rogned in a semi-fainting state. She sits wide apart. Her face expresses bitterness, the pain of losing loved ones and emptiness. Vladimir bowed over her, clinging to his heart. He repents of his deeds and asks her for forgiveness.

On the left behind the chair of Rogneda, her nurse weeps, wiping her tears with a scarf. A maid sits on the right, looking at this scene ineptly. In the background, there are two soldiers behind Vladimir. They are closely watching what is happening. There is tension in the atmosphere, but Vladimir is trying to smooth out his guilt. He does not look cruel at all, but a compassionate person. The prince stands next to his beloved, empathizing with her.

The surroundings of the composition resembles a performance. The gestures and facial expressions of heroes are pathetic and theatricalized. Losenko wrote Prince Vladimir from actor I. Dmitrievsky. The canvas reflects the embodiment of the painting of the era of classicism. The artist wrote the work, inspired by the works of Lomonosov and the ancient Russian chronicle of the 12th century, compiled in Kiev. The antiquity of architecture and costumes of heroes is impeccable! For writing this picture, the artist was awarded the title of Academician of historical painting. This is the first creation dedicated to the history of ancient Russia.

The canvas is written in light brown tones, with shades of yellow, light green and red. The artist used contrasts and light shades. The picture is written brightly and expressively. She carries her individual charm. Everyone will interpret it in their own way.