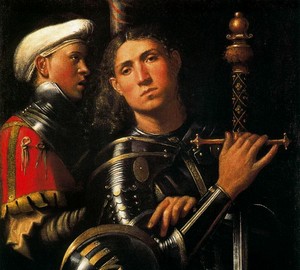 Warrior and squire (Gattamelata). Around 1505-1510. Oil on canvas. 90×73
It is not known for certain who is the author of the picture presented, but it is clear that this artist was heavily influenced by the painting of the Venetian Giorgione.

The canvas depicts the confectioner Erasmo de Narni, who lived almost a century before the painting and received the nickname Gattamelata – “Lasca cat”. He came out of the lower strata of society, he became an hired soldier, served in different cities and different rulers, rose to the confectioner – the leader of the detachment, who was in the service of the commune. In addition, he became the ruler of Padua, and his horse statue of Donatello’s work was installed near the main Paduan cathedral – the papal basilica of Sant Antonio. The picture next to Gattamelata probably depicts his son Antonio.

Giorgione and his followers formed a whole trend in Venetian painting of the turn of the XV-XVI centuries, the hallmark of which was the contemplative mood of the depicted characters. So this warrior with no means refined appearance, accustomed to the heavy, full risk of life, froze with such an expression on his face as if he was listening to music. His sword, armor and helmet are perceived only by symbols, and the boy by an angel standing behind his shoulder.