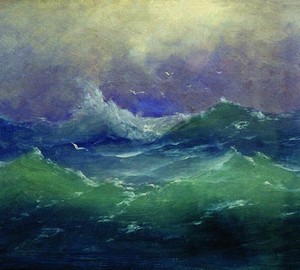 Quinji was not a marinist, like Aivazovsky, but his image of the stormy sea is not inferior to the best examples of world art in this area. The waves in the picture look voluminous and lively, and the transparency of the water is transmitted with unique skill. At the same time, the audience has a typical picture in the style of “impressionism” – a bright and unusually spectacular transmission of sensation from the stormy sea.

The canvas is written with juicy saturated colors, wide free strokes that give the waves texture and volume. The active movement of the water is emphasized by white, foamy “barashki” on the tops of large, storm waves made by light, air tangles of the brush.

White gulls floating over the stormy sea add realism to the canvas and make it even more “transparent”, filled with saturated smells of the sea. They are depicted symbolically, but perfectly “read” against the background of the waves.

For the picture, very expressive and “dense” intense colors are used – blue, emerald green, lilac, bluish and yellowish shades. They perfectly convey the glass texture of sea water and its attractive color even in a storm. The waves through which the scattered light breaks through seem emerald and transparent, like a real gem.

Sea distances are filled with thick lilac haze, because of the height of the waves and the strongest excitement, the horizon is not visible, and the sky is drowning in fumes and merging with sea dalks. At this point, nothing distracts the attention of the viewer from the depth and terrifying power of the elements, which is capable of sweeping away any human achievements like chips.

Let there be no signs of the existence of human civilization on this canvas, but it still has the main character. This sea itself is deep, beautiful and dangerous, which can be both the breadwinner and the mortal enemy of all living things.