“What is the truth?”, Nikolai Nikolaevich Ge – overview of the painting 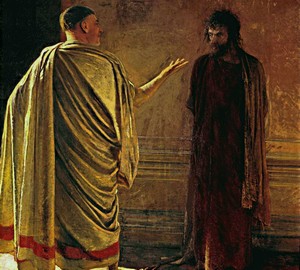 The painting, written by Nikolai Ge on the well-known biblical plot, caused a lot of emotions, both positive and negative, in the audience and critics. This is due to the fact that both the images on the canvas and the interpretation of the plot itself, and even the artistic features, were all innovative and extraordinary.

Wide-minded people accepted the picture and appreciated it, but representatives of the highest church authorities, people who are in touch and striving to adhere to the centuries-old canon, remained extremely dissatisfied, even indignant with the artist’s insolence and free-thinking. At the same time, some of his associates in art also did not understand the novelty and innovation of the work of Ge.

Although the plot of the picture was used repeatedly, before Ge no one interpreted the biblical scene in this way. On his canvas, only two figures are Jesus Christ and Pontius Pilate, the prosecutor of Judea. The picture depicts the moment of the interrogation of Christ by Pilate, after which he pleaded not guilty. Everything seems to be as usual, but the interpretation is completely unusual.

The figure of Christ is covered in shadow, while bright sunlight falls on Pilate. A man who has condemned the man of God to death, is fanciful and catchy, has a large expressive figure, and is also located in the foreground. At the same time, Christ is worse, ugly, dressed modestly, if not poor. This is a real slap in the traditional art, because the classical images of Jesus interpreted it as a beautiful young man with subtle features of his face, long well-groomed curls dressed in clean white clothes.

It is not surprising that such a picture caused the displeasure of traditionalists from art and religion. Even Tretyakov, who bought a painting for his gallery, did not want to do this, but acquired a canvas only after the angry letter of Lev Tolstoy. Thanks to this, the innovative picture has come to our days, which cannot be said about the “Mercy”, on top of which it was written.