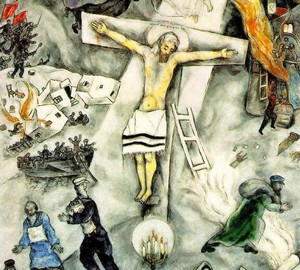 One of the best and tragic paintings of Mark Chagall “White Crucifixion” is written by the artist after Jewish pogroms in Germany, which went down in history as “Crystal Night”. As a Jew, Chagall was deeply concerned about the political situation in Europe, dictating frank anti-Semitism. Very little time will pass, and the painter himself will hardly escape the concentration camp, and therefore it is not surprising that many of his paintings of this period reflect the terrifying reality of the Holocaust.

It is noteworthy that as a Jew, the artist chose the image of Christ crucified on the cross (Judaism does not recognize Jesus as the Savior) as the main symbol of the tragedy of the Jewish people. The suffering Christ personifies the suffering Jews from Chagall – an attentive audience will immediately find hints of this identification. Jesus has not a crown of thorns on his head, but thales, an element of the prayer vestments of the Jews, and a seven-light-minor burns at his feet.

At the bottom of the cross, Chagall depicted scenes of Nazi atrocities, and at the top of the picture are Old Testament characters who cry from the horrors of what they see. It is customary to interpret the figure of a wanderer in green vestments as the prophet Elijah, and the ship-combined as a symbol of possible salvation. Also in the picture you can notice the red communist flags and the flag of another independent Lithuania.

The plot in the lower left corner of the canvas is deeply tragic – a Jew with open arms. On his chest we see a white plate that previously represented the inscription in Yiddish: “I am a Jew.”. But Chagall decided to paint it, as well as the swastika on the sleeve of the Nazi burning the synagogue.

The distinctive picture of the White Crucifixion was a premonition of even greater destruction and inhuman killings, and makes an incredible strong impression. A curious fact is that this is the favorite work of Pope Francis.