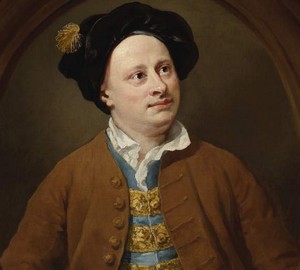 This outstanding English painter famous as a master of satire, the Creator of specific kinds of art, trying to bring up morality in society through art. He made an enormous contribution to painting and graphics XVIII-century England, and the whole world too.

The future artist was born in 1697 in London, in a poor family where the father is a teacher moonlighting as a translation from Latin, and his mother manufactured various drugs for popular recipes. He was the first child in the family who managed to survive the infant mortality rate in those days was very great.

Creative tendencies appeared in his early childhood, he had a rare ability for a child to note and remember even the smallest details. But in school he studied literally under the lash, didn’t want to do anything more than beloved drawing.

When his family impoverished, and his father was in debtor’s prison, William became an apprentice to an engraver, silversmith. Here he was graduated, learned to work with metal and make prints and learn about all the features of the fashionable Rococo style.

After the death of his father the future artist had to become a breadwinner for his family besides him, my mother had two more daughters. His work he loved, but was forced to do it for food.

To realize their dreams, William began to learn and take lessons at private art academies. In 1720 he was able to open his own workshop and began to print their own prints, mostly satirical content “on the topic of the day”.

Four years later, Hogarth was in school, which was founded by the court painter D. Thornhill. In the period up to 1730 William learning to illustrate books, and in 1726 the well-known poem “Hudibras” by Samuel Butler. Two years later he wrote his first paintings – it was created for the play “the beggar’s Opera” by D. Gay.

The artist married the daughter of his former teacher, Thornhill – secretly, without his consent. The father accepted the choice of his daughter only after Hogarth became famous and managed to significantly improve their welfare.

In the following years, the master produced a series of paintings and prints, which were spread wide circulation and was in great demand and popularity among all segments of the population. Among the most famous is the six paintings and engravings from them “Career prostitute” rake’s progress “Fashionable marriage”, “Diligence and laziness”, “the Four stages of cruelty”, “parliamentary Elections”.

In 1753, he published a book about the art of “Analysis of beauty”. After four years the king did Hogarth main court painters, replacing at the post of his father.

During his life he created many engravings and paintings, satirical and sometimes very toxic denouncing the vices of contemporary society. He always stood on the positions of the Enlightenment and tried therefore to convey to people the truth about their own behavior.

The master died in 1764 in his native London.