“Winter landscape”, Hendrik Averkamp – a description of the picture 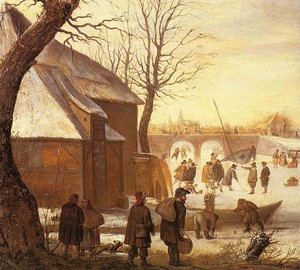 As you know, the last 25 years of the 16th century, the winters of Europe were very cold and all rivers and lakes completely froze. This time was even called the “small ice age.”. But people continued to live and work, also adding ice skating to their homes. The painting “Winter landscape”, made in the early period of the painter in 1610, just opens up such a page from the life of a small town.

Of course, in this work, imitation of the famous artist of Flemish painting, Peter Braigel the Elder, is still felt, but the individuality of Averkamp’s talent is already visible. Hendrick masterfully combines a genre scene with a landscape.

Against the background of the frosty sky and snowy expanse, trees and houses are very clearly and brightly drawn, in the distance the contours of the towers and walls of the city, wooden buildings, stone bridges that have frozen to spring are visible.

And on the ice “road”, into which the river has turned, life boils and goes on. Here in the foreground came the master people, watching how best to cross the ice. Near the tree, a couple is talking lively, around which a funny dog is spinning. Nearby are two men near the boat, they put on skates and now replenish the ranks of carefree vacationers.

Far from the middle and long-range, the artist draws ordinary residents of the city, they skate, play games with clubs, slip and fall, communicate and get to know each other. Each figure creates its own plot, which can mentally “draw”.

Such kind, full of peace and life appear before us the work of the famous “dumb of Kampen” – Hendrik Averkamp. You charm his paintings, despite the brightness of the color scheme and the repeatability of the plot. But they are childishly viable and cheerful.