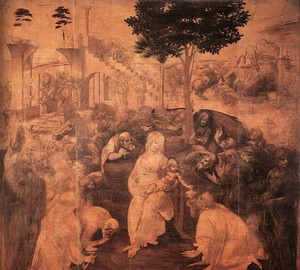 This altar image was ordered by Leonardo Da Vinci (1452-1519) by canonists of the San Donato Monastery in Skopeto, but remained unfinished either because the artist left for Milan, or because he simply left this plan. But the picture looks complete and carries all the features of the then painting of the master.

In the tradition of quatrochento, Leonardo somewhat overloaded the composition with an abundance of figures in expressive poses, details of landscape and architecture. However, this can be explained by the fact that Leonardo, as an Renaissance artist, was curious before what constitutes a world order. Therefore, a category such as diversity played a big role for him.

The divine among Italian humanists stood in the center of the universe. Leonardo Maria, holding the Baby Christ on her lap, stands out against the background of many “actively acting” characters with a calm posture and a smooth turn of her head. The artist builds a compositional triangle or, more precisely, a pyramid on the top of which is the head of Mary. Such a technique, which gave the depicted balance and harmony, was widely used among the masters of the High Renaissance.