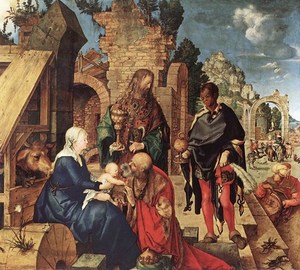 Wolves worship – Albrecht Durer. 1504. Wood, butter. 99 x 113.5 cm
The artist of the German Renaissance, Albrecht Dührer (1471-1528), was ordered by the Elector of Saxon Friedrich the Wise for the chapel of his castle in Wittenberg. Dührer then just returned from the first trip to Italy, so the features of North European painting – a detailed image of details, bright, shining colors – coexist here with the influence of Italian painting, which resulted in the promising construction of the composition. In addition, the ruins of ancient buildings that create complex spatial plans are visible in the picture, which again was characteristic of Italian painting.

The “wolf worship” resembles the unfinished canvas of Leonardo da Vinci on a similar plot, also stored in Uffizi. But the Venetians, Andrea Mantenya, had a direct influence on Durera with his addiction to the abundance of stone in paintings and Giovanni Bellini with his light and clear painting. However, the characters of Durer are written with the degree of psychology that was especially inherent in him.

The artist introduced touching moments into the worship scene: Baby Christ opens the casket, where the gold brought to Him by one of the Magi lies, with the curiosity with which all the children reach the unknown, and the old magus looks at this child with a serious and inspired look, tilting his head to one side. Like many artists of the Northern Renaissance, Dührer does not depart from the detail that the Magi came to Christ from different parts of the world, which means that there could be a black among them.

Despite the abundance of details, the picture is full of exalted spirit, a soft and at the same time solemn mood, which was characteristic of the painting of this German master.